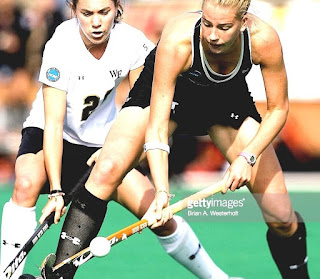 The NCAA Division I Field Hockey Championship is an American intercollegiate field hockey tournament conducted by the National Collegiate Athletic Association (NCAA), and determines the Division I national champion. The championship is contested exclusively by women's teams and there is no equivalent NCAA men's championship. The tournament has been held annually since 1981. The most successful team is the Old Dominion Lady Monarchs who have nine titles. The most recent championship, hosted in Norfolk, Virginia, was won by Delaware. Division II and Division III championships are also held each year.

Field hockey was one of 12 women's sports added to the NCAA championship program for the 1981â€"82 school year, as the NCAA engaged in battle with the AIAW for sole governance of women's collegiate sports. The AIAW continued to conduct its established championship program in the same 12 (and other) sports; however, after a year of dual women's championships, the NCAA overcame the AIAW and usurped its authority and membership. The first NCAA women's national championship events were staged November 21â€"22, 1981, in cross country and field hockey.

The tournament originally began with six teams but has since expanded to 19; at different times a third-place game has been played as well. Under the tournament's current format, 19 teams qualify for the tournament with three play-in games. The play-in games and first two rounds are played at the home turf of the higher seeds in each matchup. The final four teams then move on to the championship rounds at a predetermined site.