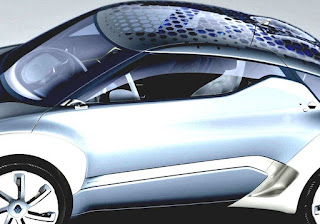 The Renault Z.E. (Z.E. stands for Zero Emission) is a line of all-electric cars from Renault. The line began with the Z.E series of concept cars. The first production car is the Renault Fluence Z.E. that is scheduled for sales to the public in Israel and Denmark by late 2011 as part of the Better Place network, operated by Renault Fluence ZE cars. In 2011 Renault was awarded a contract to supply 15,600 electric vehicles to the French government and the state-owned postal service, La Poste. The vehicles are to contribute to a planned 25,000 electric vehicle fleet owned by the French government.

The first model in the Z.E. project was a concept based on the Renault Kangoo Be Bop. It debuted at the 2008 Paris Motor Show

In 2009 at the Frankfurt Motor Show, Renault extended the concept from one model to four:

Renault announced that cars "previewed" by all four Z.E. concept vehicles would be released from 2011 onwards and cater for a wide variety of different customers and uses.

At the 2010 Paris Motor Show Renault showed the "Zoe Preview", promoting it as "a realistic glimpse of the forthcoming mass-market Renault electric car... a near-definitive representation (90 per cent) of the vehicle that will be manufactured at Renault's Flins plant, France. Its launch is scheduled for mid-2012." The show car supports the same QuickDrop battery swap capability as the Fluence Z.E., and DC fast charging.

In 2010 Renault announced details of the first vehicles intended for production in 2011, the Fluence Z.E. and Kangoo Z.E. models. Customers in several countries can pre-reserve models at the Renault-ZE web site, although as of April 2010 it has no pricing details.

Renault will initially purchase batteries from AESC, the Nissan-NEC joint venture in Japan. It announced development of battery production facilities in France, Japan, Portugal, UK, and the USA. The Megane Z.E., a hatchback version of the Fluence Z.E., is also in development.

In November 2017, a new electric-car-share project was kicked off in Haifa, Israel. The project features 100 public Renault Zoe cars with its own parking spaces scattered around Haifa, operated by a smart card.