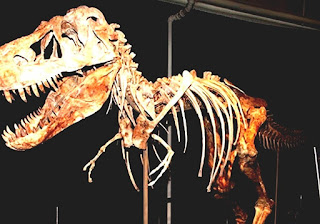 The Museum of Dinosaurs and Ancient Cultures is located at 250 West Cocoa Beach Causeway, Cocoa Beach, Florida. The planned 20,000 square-foot museum contains two floors of exhibits on dinosaurs and ancient human cultures. The museum was estimated to cost approximately $3.7 million to create and opened to the public in 2017.

The larger, "Hall of Dinosaurs" floor is divided by period, the two larger halls belonging to the Jurassic and Cretaceous, with the Triassic hall between them. Alongside the Triassic hall there are also displays for the Permian period, prehistoric oceans, modern birds, and feathered dinosaurs. Notable inclusions include a full size Parasaurolophus, an attack scene with two Allosaurus ganging up on a Diplodocus, and a forty-six foot long Giganotosaurus skeletal reconstruction.

The second floor's "Ancient Cultures" floor is separated by region with displays for Central Africa and New Guinea, followed by larger sections for ancient Egypt, Mesoamerica, and China which include duplications of King Tutankhamun's tomb, Terracotta Army soldiers, and Chichen Itza's temple of warriors, alongside many authentic artifacts in display cases.