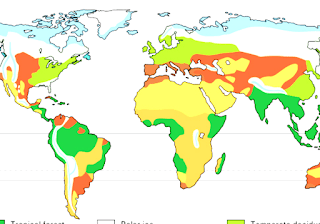 Temperate deciduous forests or temperate broad-leaf forests are dominated by trees that lose their leaves each year. They are found in areas with warm moist summers and cool winters. The three major areas of this forest type occur in the Northern Hemisphere: eastern North America, East Asia, and Europe. Smaller areas occur in Australasia and southern South America. Examples of typical trees in the Northern Hemisphere's deciduous forests include oak, maple, beech and elm, while in the Southern Hemisphere, trees of the genus Nothofagus dominate this type of forest. The diversity of tree species is higher in regions where the winter is milder, and also in mountainous regions that provide an array of soil types and microclimates. The largest intact, temperate deciduous forest in the world is protected inside of the six-million-acre Adirondack Park in Upstate New York.

The principal factor operating in these forests is the seasonal appearance and disappearance of the canopy. Shade from the canopy limits the growth of many kinds of plants. Many species that are typical of these forests time their growth and flowering to the short period just before the canopy opens; hence, they are known as spring ephemerals. Examples include trilliums and bloodroot. Most spring ephemerals are insect-pollinated, and the seeds themselves are often transported by ants, a mode of dispersal known as myrmecochory. A smaller number of species is able to grow under the canopy, and even a few that grow during the period when leaves are being lost. The average yearly precipitation is 30 - 60 in (75 â€" 150Â cm). Temperate deciduous forests have a great variety of plant species. Most have three levels of plants. Lichen, moss, ferns, wildflowers, and other small plants can be found on the forest floor the shrubs fill in the middle level, and hardwood trees like maple, oak, birch, magnolia, sweet gum, and beech make up the third level. Birds such as broad-winged hawks, cardinals, snowy owls, and pileated woodpeckers are also found in this biome. Mammals include white-tailed deer, raccoons, opossums, porcupines, and red foxes. Animals that live in the temperate deciduous forest must be able to adapt to the changing seasons.

Many understory plants have leaf adaptions to cope with low light levels, and the need to exploit moving flecks of light on the forest floor. A few, such as Indian pipe and Corallorhiza orchids, have adapted to the shade by parasitism. The trees similarly are controlled by shade. Most tree seedlings require small gaps when trees fall and make space to regenerate. A few require larger gaps such as those produced by windstorms. Gradients of soil moisture, soil depth, elevation and aspect control the distribution of many trees, shrubs and herbaceous species. Some require unusual conditions such as steep slopes, infertile soil, and drought to escape competition from the more common tree species.

Many migratory birds time their arrival to coincide with the opening of the canopy, which provides the insects that are their principal food sources for raising young. The spring warblers of North America are a typical, for example the black-throated blue warbler. Owing to the availability of wood from standing and fallen trees, woodpeckers are frequently found. The pileated woodpecker is a typical large species. Fallen wood, known as coarse woody debris, provides shelter for many kinds of amphibians, particularly salamanders. Many well-known animals live in this kind of forest; a few examples include squirrels, which are an important canopy species, and bears, which hibernate in the winter. The top predators in deciduous forest were once wolves and cougars, along with species of weasel like the fisher.

Humans have often colonized areas in the temperate deciduous forest. They have harvested wood for timber and charcoal. During the settlement of North America, potash made from tree ashes was exported back to Europe as fertilizer. This left less than one-quarter of original forests to remain. Many forests are now small fragments dissected by fields and roads; these islands of green often differ substantially from the original forests, particularly along the edges. The introduction of exotic diseases continues to be a threat to forest trees, and hence, the forest; examples include the loss of chestnut and elm. At the same time, species such as deer, which are clearing rather than true forest animals, have expanded their range and proliferated in these altered landscapes. Large deer populations have deleterious effects on tree regeneration overall, but particularly for edible species including yew, yellow birch, and hemlock. Deer grazing also has significant negative effects on the number and kind of herbaceous flowering plants. The continuing pressure to increase deer populations, and the continued killing of top carnivores, suggests that overgrazing by deer will continue to be a significant forest conservation problem. Objective criteria for the restoration of deciduous forest include large trees, coarse woody debris, spring ephemeral, and top predators.