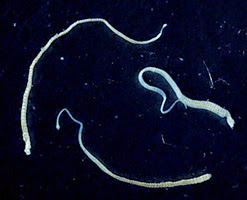 Dwarf tapeworm (Hymenolepis nana, previously known as Vampirolepis nana, Hymenolepis fraterna, and Taenia nana) is a cosmopolitan species though most common in temperate zones, and is one of the most common cestodes (a type of intestinal worm or helminth) infecting humans, especially children.

As its name implies (Greek: nanos â€" dwarf), it is a small species, seldom exceeding 40Â mm long and 1Â mm wide. The scolex bears a retractable rostellum armed with a single circle of 20 to 30 hooks. The scolex also has four suckers, or a tetrad. The neck is long and slender, and the segments are wider than long. Genital pores are unilateral, and each mature segment contains three testes. After apolysis gravid segments disintegrate, releasing eggs, which measure 30Â Âµm to 47Â Âµm in diameter. The oncosphere is covered with a thin, hyaline, outer membrane and an inner, thick membrane with polar thickenings that bear several filaments. The heavy embryophores that give taeniid eggs their characteristic striated appearance are lacking in this and the other families of tapeworms infecting humans. Rostellum remains invaginated in the apex of the organ. Rostellar hooklets are shaped like tuning fork. Neck is long and slender, the region of growth. Strobila starts with short, narrow proglottids, followed with mature ones.

Infection is acquired most commonly from eggs in the feces of another infected individual, which are transferred in food, by contamination. Eggs hatch in the duodenum, releasing oncospheres, which penetrate the mucosa and come to lie in lymph channels of the villi. Oncospheres develops into a cysticercoid which has a tail and a well formed scolex. It is made of longitudinal fibers and is spade shaped with the rest of the worm still inside the cyst. In five to six days cysticercoids emerge into the lumen of the small intestine, where they attach and mature.

The direct life cycle is doubtless a recent modification of the ancestral two-host life cycle, found in other species of hymenolepidids, because cysticercoids of H. nana can still develop normally within larval fleas and beetles. One reason for facultative nature of the life cycle is that H. nana cysticercoids can develop at higher temperatures than can those of the other hymenolepidids. Direct contaminative infection by eggs is probably the most common route in human cases, but accidental ingestion of an infected grain beetle or flea cannot be ruled out. The direct infectiousness of the eggs frees the parasite from its former dependence upon an insect intermediate host, making rapid infection and person-to-person spread possible. The short life span and rapid course of development also facilitate the spread and ready availability of this worm.

Hymenolepis nana, like all tapeworms, contains both male and female reproductive structures in each proglottid. This means that the dwarf tapeworm like other tapeworms is hermaphroditic. Each segment contains 3 testes and a single ovary. When a proglottid becomes old and unable to absorb any more nutrition, it is released and is passed through the host's digestive tract. This gravid proglottid contains the fertilized eggs, which are sometimes expelled with the feces. However, most of the time, the egg may also settle in the microvilli of the small intestine, hatch, and the larvae can develop to sexual maturity without ever leaving the host.

The dwarf tapeworm like all other tapeworms lacks a digestive system and feeds by absorption on nutrients in the intestinal lumen. They have non-specific carbohydrate requirements and it seems like they will absorb whatever is being passed through the intestine at that time. When it becomes an adult, it will attach to the intestinal walls with its suckers and toothed rostellum and have its segments reaching out into the intestinal space to absorb food.

Pathology and clinical manifestations of hymenolepiasis Hymenolepis nana lodges itself in the intestines and absorbs nutrients from the intestinal lumen. In human adults, the tapeworm is more of a nuisance than a health problem, but in small children, many H. nana can be dangerous. Usually it is the larva of this tapeworm that causes the most problem in children. The larva will burrow into the walls of the intestine, if there are enough tapeworms in the child, severe damage can be inflicted. This is done by absorbing all the nutrition from the food the child eats. Usually a single tapeworm will not cause health issues. Hymenolepis nana usually will not cause deaths unless in extreme circumstances and usually in young children or in people who have weakened immune systems. In some parts of the world, individuals that are heavily infected are a result of internal autoinfection.

The 2 drugs that have been described for the treatment of hymenolepiasis are praziquantel and niclosamide. Praziquantel, which is parasiticidal in a single dose for all the stages of the parasite, is the drug of choice because it acts very rapidly against H. nana. Although structurally unrelated to other anthelminthics, it kills both adult worms and larvae. In vitro the drug produces vacuolization and disruption of the tegument in the neck of the worms, but not in more posterior portions of the strobila. Praziquantel is well absorbed while taken orally, it undergoes first-pass metabolism and 80% of the dose is excreted as metabolites in urine within 24 hours. Preventing fecal contamination of food and water in institutions and crowded areas is of primary importance. General sanitation and rodent and insect control (especially control of fleas and grain insects) are also essential for prevention of H. nana infection. Repeated treatment is required for Hymenolepis nana at an interval of 7-10 days. 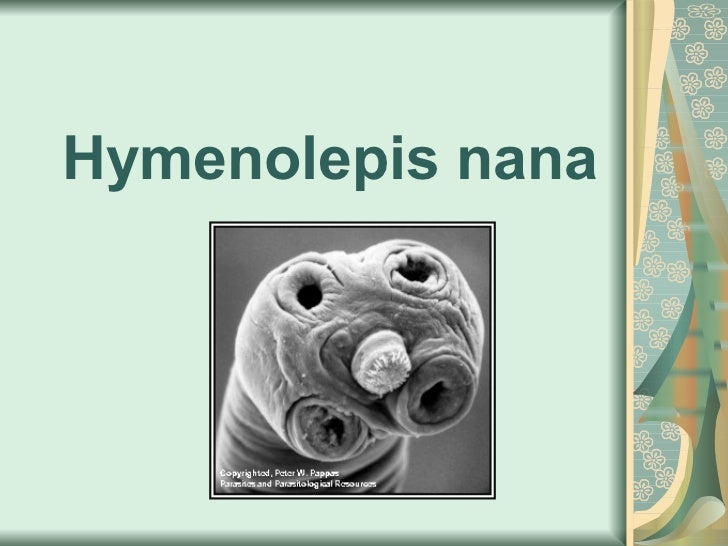