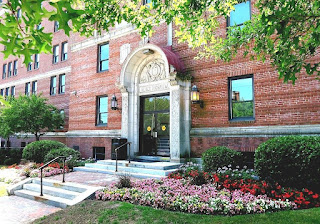 Mercy Hospital is a Roman Catholic not-for-profit community hospital in Portland, Maine. It was founded in 1918 by the Roman Catholic Diocese of Portland and the Sisters of Mercy to provide excellent healthcare, especially to the poor and disadvantaged. It has two sites, Mercy State Street (in Portland's West End) and Mercy Fore River.

Mercy Hospital opened as "Queen Anne's Hospital" on the corner of State Street and Congress Street in response to the 1918 flu pandemic after city hospitals refused Irish Catholic patients during that pandemic. It had 25 beds. In 1943, the current full hospital, located just down the road at 144 State Street, opened. It expanded in 1952 and was significantly renovated in the 1980s.

Mercy is the fourth-largest hospital in the state and began construction on its new campus along the Fore River in late 2006. In September 2008, Mercy opened a new campus on 42 acres of land overlooking the Fore River. The expansion is expected to be fully completed by the 100-year anniversary in 2018.

In 2013, Mercy Hospital was acquired by Eastern Maine Health Systems of Brewer, Maine.