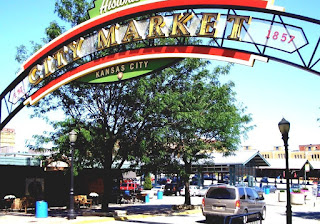 The River Market (formerly known as Westport Landing, the City Market, and River Quay) is a riverfront neighborhood in Kansas City, Missouri that comprises the first and oldest incorporated district in Kansas City.

River Market stretches north of the downtown Interstate 70 loop to the Missouri River, and is bordered by the Buck O'Neil Bridge on the west and the Heart of America Bridge on the east. The area encompasses the location in which Kansas City was first founded. The market name comes from its large open air farmers' market, the southern section of which was the public square in the mid 19th century.

It derives its "Westport Landing" name because it was the dock on the Missouri River for the exchange of goods going to the community of Westport three miles to the south on higher ground that was operated by John Calvin McCoy. McCoy was to lead a group of settlers to create the "Town of Kansas" in the neighborhood in 1850 which in turn became the "City of Kansas" in 1853.

The Quay name was applied to the neighborhood in the 1970s by developer Marion A. Trozzolo to capitalize on the neighborhood's early French connections as a fur trading post operated by FranÃ§ois Chouteau of the powerful Chouteau clan starting in 1821. Trozzolo's vision was to make this neighborhood a destination for restaurants and bohemian shops.

The City Market area when previously known as River Quay, was the site of many mob activities, including car bombs and more.

Since its inception in 1857, the City Market continues to be one of the largest and most enduring public farmers' markets in the Midwest, linking growers and small businesses to the Kansas City community. In addition, there are more than 40 full-time tenants that are open year-round and offering an eclectic mix of independently owned shops and dining.

The Arabia Steamboat Museum at 400 Grand Blvd. displays thousands of artifacts from a steamboat and its cargo that sunk nearby in 1856 and was recovered in 1987-88. The museum is among Kansas City's popular tourist attractions.

The current manager of the actual market on behalf of the City of Kansas City is KC Commercial Realty Group.