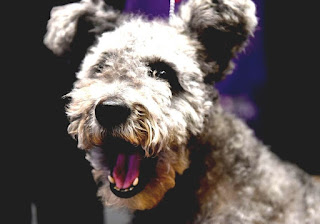 The Westminster Kennel Club Dog Show is an all-breed conformation show that has been held in New York City annually since 1877. Currently, the breed and Junior Showmanship competitions are held at Piers 92 and 94, while the group and Best in Show competitions are held at Madison Square Garden. The number of entries is so large at nearly 3000 that two days are required for all dogs to be judged.

The Westminster Kennel Club Dog Show is one of a handful of benched shows in the United States. Dogs are required to be on display in an assigned location (bench) during the entirety of the show except when being shown in the ring, groomed for showing, or taken outside to eliminate, so that spectators and breeders alike have an opportunity to see all the entered dogs. (In the more common unbenched shows, dogs are required to be present only at assigned ring times.)

The Westminster show was first held on May 8, 1877, making it the second-longest continuously held sporting event in the United States behind only the Kentucky Derby, which was first held in 1875. (Both events were held even during the World War years.) The show originated as a show for gun dogs, primarily Setters and Pointers, initiated by a group of hunters who met regularly at the Westminster Hotel at Irving Place and Sixteenth Street in Manhattan. They decided to create a kennel club called the Westminster Kennel Club specifically for the purpose of holding a dog show. The prizes for these first shows included such items as pearl handled pistols, of use to the hunters and terriermen who worked these dogs in the field.

Held at Gilmore's Garden (Madison Square Garden) the Westminster show drew over 1200 dogs and proved so popular that its scheduled three days was extended to four, with the club donating proceeds from that fourth day to the ASPCA for creation of a home for stray and disabled dogs.

The Westminster Kennel Club predates the formation of the American Kennel Club by seven years, and became the first club admitted to the AKC after AKC's founding in 1884. Breed parent clubs (e.g., the Afghan Hound Club of America) create the standards for judging their breeds, with the AKC administering the rules about shows and judging.

Dogs are judged against their breed standards, to see how close each dog matches the standard, which is a written description of the ideal specimen of that breed. Standards may include references relating form to function in the performance of the job that the dog was bred for, and may also include items that seem somewhat arbitrary such as color, eye shape, tail carriage and more. While many breeds no longer need to perform their original jobs and are bred mostly for companionship, they should still have the innate ability and physical makeup to perform those jobs, and this is what the judge looks for.

Because of space considerations at Madison Square Garden, the entry is limited to 2,800 dogs and the breed judging is done during the day at Piers 92 and 94. Group and Best in Show judging take place in the evening at Madison Square Garden. The entry fills immediately on the first day that entries are accepted. Since 1992, the club has invited the top five dogs in each breed to be pre-entered (determined by the number of dogs defeated at shows during the previous year) to assure that all the top dogs have the chance to compete.

Today, Westminster takes place over two days and nights every February. During the day, the dogs compete at the breed level (i.e., against other dogs of the same breed). Each Best of Breed winner (BOB) advances into its respective group, of which there are seven (Sporting, Hound, Working, Terrier, Toy, Non-Sporting, and Herding). Group competition is held during the evenings, and the seven group winners advance into the final competition, which one judge will select one of them as the Best In Show winner. Since 2014, the show allowed mixed-breed dogs to compete in an agility event.

Competition in Junior Showmanship (for handlers ages 9â€"18) has been held since 1934. The eight finalists all receive scholarships for post-secondary schooling. In addition, each year the club (through its Westminster Kennel Foundation) awards veterinary school scholarships for students from six schools.

The winning dog becomes "America's Dog" for the next year. It begins its reign with a media tour on the day following the show with appearances on virtually all television network morning shows, a visit to the Observation Deck at the Empire State Building, and much more.

The event is embraced in New York City every February, with salutes from such world-famous partners as the Empire State Building, which lights its tower in purple and gold (Westminster colors) during the show; Saks 5th Avenue, which features a street window with a Westminster-themed display; and the New York Stock Exchange, which invites the winner to ring the opening bell following its big win.

Animal-rights advocates such as PETA have routinely protested the show, arguing that the propagation and celebration of purebreds ultimately adds to the millions of dogs who end up at and die in shelters. The AKC considers dogs to be property and has lobbied against mandatory spay-and-neuter programs, referring to such legislation as "anti-dog."

For many years, Roger A. Caras was known as "The Voice of Westminster" for providing the narration for the breed descriptions during the show.

In 2001, Michael J. LaFave was named show announcer at the Westminster Kennel Club Dog Show. He was replaced by Jim Fagan in 2010, but returned in 2011.

CBS Sports covered the event from the late 1960s to the 1980s as part of its CBS Sports Spectacular anthology series.

From 1984 until 2003, Universal's USA Network broadcast the Westminster Kennel Club Dog Show. Following Universal's acquisition by General Electric in 2003 to form NBC Universal, from 2004 until 2016, it was produced under the auspices of NBC Sports. From 2006 through 2016, the Monday coverage was aired by CNBC due to conflicts with WWE Raw on USA. On July 28, 2015, it was announced that Fox Sports had acquired rights to the event under a 10-year deal beginning in 2017. Coverage is split between Fox Sports 1 and Nat Geo Wild.

Frei provided the commentary of the 140th event for his final time. According to a report in the New York Times, the Westminster Kennel Club would not allow Frei to announce their annual event, as well as announce the Kennel Club of Philadelphia's National Dog Show, which airs on Thanksgiving Day on NBC, as Westminister was leaving NBC for Fox starting in 2017.

The 141st event in 2017 marked the beginning of the Fox Sports contract. Chris Myers and Westminster Director of Communications Gail Miller Bisher host the primetime coverage on Fox Sports 1. Justin Kutcher hosts the daytime breed judging on National Geographic Wild, initially in 2017 with Paula Nykiel and Jason Hoke. For 2018, Fox changed both booths. Kutcher remained host for the daytime judging with Kimberly Meredith Cavanna and Don Sturz, while Hoke moved to the primetime coverage to join Myers and Bisher as a three-man booth.

Fox has also added a one-hour documentary that airs in April, Crowned: Inside the Westminster Dog Show, featuring various dogs, their handlers, and owners as they went through the dog show from a few days before to the dog show itself. It has been produced in both years of the Fox contract.

In 1884, the AKC began requiring that all dog participants be registered with the AKC and recognized for conformation show competition. In 2016, there are 199 breeds and varieties eligible for Westminster. Because of the show's popularity and prestige, starting in 1992 the AKC limited entries by requiring that dogs must have already earned their breed championship before appearing at Westminster. Later, that rule was amended to require that dogs have one of the two required major wins towards their championship titles, but need not be finished champions to enter.

The top five dogs in each breed (based on breed points earned in AKC conformation showing through October 31 of the preceding year), as well as the Best of Breed winner from each breed's national specialty show, receive printed invitations by mail and are eligible for early entry. After the early entry deadline passes, other dogs with at least one major win may enter, up to a total of 2800 dogs, at which point entries are closed.

There is no prohibition against a winner competing again in future Westminster shows. In fact, seven dogs have won multiple Westminster championships: six dogs in consecutive years (including Warren Remedy, the only three-time champion of the event) and one dog in non-consecutive years. Since 1972, however, there have been no repeat winners. (See List of Best in Show winners of the Westminster Kennel Club Dog Show.)

Dogs of all breeds, including mutts, may participate in the show's agility competition. The highest ranking mutt in the competition is given an award, "All American Dog."

Through the 134th Westminster Show (February 2010), Best in Show has been won by the Terrier Group 45 out of the 103 times that the prize has been awarded since 1907, more than twice as many wins as any other group. The single breed that has won the most is the Wire Fox Terrier, which has won 14 times. Two of the most popular dog breeds in the United States have never won Best in Show, the Labrador Retriever and the Golden Retriever.

The 2010 winner of Best in Show was Ch. Roundtown Mercedes of Maryscot (a.k.a. "Sadie"), a Scottish Terrier. Sadie had already won 112 best-in-show ribbons at other shows, including winning the other two major United States shows (the National Dog Show and the AKC/Eukanuba National Championship) immediately prior to her Westminster win.

In 2011, at the 135th Westminster Kennel Club Dog Show, 5-year-old GCH Foxcliffe Hickory Wind became the first of her breed (Scottish Deerhound) to capture the Best in Show award.

The oldest dog to win Best in Show was a Sussex Spaniel named Ch. Clussexx Three D Grinchy Glee (a.k.a. Stump), at 10 years of age in 2009. The youngest dog to win was a Rough Collie named Laund Loyalty of Bellhaven, at 9 months old in 1929. One dog, a Smooth Fox Terrier named Ch. Warren Remedy won Best in Show three times (1907â€"1909), and six other dogs have won twice. Dogs (males) have won Best in Show 68 times to 35 for bitches (females).

Following is a list of WKC Best in Show winners since 1990.

Past winners and competitors at The Westminster Dog Show. Source : darkroom.baltimoresun.com