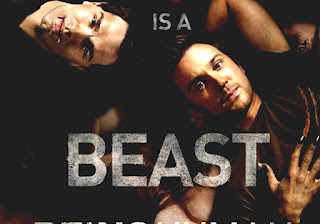 Being Human is a supernatural drama television series broadcast on Syfy in the United States and on Space in Canada. It was produced by Muse in Montreal as a remake of the BBC show of the same name.

The series revolves around three roommates living in Boston who appear to be in their twenties. The trio try to live a normal life despite being a ghost, a vampire, and a werewolf.

On June 28, 2010, Entertainment Weekly reported that actor Sam Witwer had signed on to play the vampire in the remake, and Meaghan Rath had signed to play the ghost with Sam Huntington close to a deal to play the werewolf. On July 7, 2010, it was announced that Lost and Supernatural alumnus Mark Pellegrino would be joining the cast as "Aidan's charismatic but menacing mentor Bishop".

On March 17, 2011, Syfy announced that they would be ordering a second season of its new drama series, slated to begin airing January 16, 2012.

On June 29, 2011, Variety reported that actress Dichen Lachman had signed on as a regular to play a reclusive vampire in season two.

Husband-and-wife team Jeremy Carver and Anna Fricke were tasked with adapting the British series for North American television. Carver said that he and Fricke hoped "to use elements of the original series while reimagining a series all of our own. I think that starts with many of the new characters and storylines that we created. I think you're going to see a show that gives a very nice nod to the original version." Carver and Fricke said they intended to retain the original program's dark and morally ambiguous qualities.

The first 13-episode season roughly follows the narrative arc of season one of the British original; however, the British version was only six episodes, so the North American program developed new stories and arcs to fill out the story line enough for 13 episodes. Some similar elements were also developed in a different manner; Carver said, "We explore these moments and what the characters experienced in the British version and say to the writers, 'What if we do this differently?" However, elements of the directorial style of the first two episodes followed the original pilot and first regular episode of the UK series, in some cases shot-for-shot.

One explicit tribute to the British series is the name of the vampire, Aidan; the character is named after Irish actor Aidan Turner, who played the vampire Mitchell in the original series. The other main characters in the North American version at first appear to correspond to their British counterparts (werewolves Josh and George, ghosts Sally and Annie, vampire leaders Bishop and Herrick), but actor Sam Witwer was keen to stress the differences between the characters in the two programs: "These are not the same characters.... There are a lot of similarities, but for example, Bishop is not Herrick. Not in the slightest. He's not the same guy."

The North American series' writers, and actors, had avoided watching the British second series when it aired on BBC America until after they had finished filming their (North American) first season. Witwer told an interviewer that he had watched only the first episode, and avoided watching any more in order to avoid subconsciously mimicking Irish actor Aidan Turner's performance. At San Diego Comic Con 2011's Being Human panel, the actors confirmed that since finishing filming the first season they had finally caught up with watching the British series, but that the writers would deliberately maintain their policy of not watching anything beyond the first series of the British Being Human, in order to ensure the North American series developed down different paths as they moved into the second season.

On February 8, 2012, Syfy announced that they would be ordering a third season of the drama series. set to premier on January 14, 2013.

On April 10, 2013, Syfy announced that they were renewing Being Human for a fourth, with 13 episodes set to air.

According to Bill Gorman from the website TV by the Numbers, season one's premiere episodes of Being Human averaged 1.8 million viewers, making it Syfy's most successful winter season scripted series launch since 2005. "Through its first nine weeks on Syfy, and including repeat broadcasts, Being Human [was] seen by 19.1 million total unique viewers."

Notably, the show's audience was as high as 52% female during the second season, a first for the SyFy network.