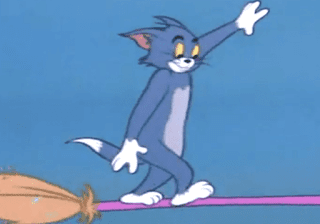 Thomas "Tom" Cat is a fictional character and one of the title characters (the other being Jerry Mouse) in Metro-Goldwyn-Mayer's series of Tom and Jerry theatrical animated short films. Created by William Hanna and Joseph Barbera, Tom is a blue/grey anthropomorphic domestic short-haired cat who first appeared in the 1940 MGM animated short Puss Gets the Boot. Tom was originally known as "Jasper" during his debut in that short; however, beginning with his next appearance in The Midnight Snack he is known as "Tom" or "Thomas".

His full name, "Tom Cat", is based on "tomcat", a phrase which refers to male cats. He is very rarely heard speaking with the exception of a few cartoons (such as 1943's The Lonesome Mouse and Tom and Jerry: The Movie). His only notable vocal sounds outside of this are his various screams whenever he is subject to pain or panic. He is continuously after Jerry Mouse, for whom he sets traps, many of which backfire and cause damage to him rather than Jerry. His trademark scream was provided by creator William Hanna.

Tom has changed over the years upon his evolution, especially after the first episodes. For example, in his debut, he was quadrupedal and had normal cat intelligence. However, over the years (since the episode Dog Trouble), he has become almost completely bipedal and has human intelligence and he is similar to his previous appearance, in 1945 shorts he had twisted whiskers and his appearance kept changing. In the 1940s and early 1950s, he had white fur between his eyes. In newer cartoons, the white fur is gone. As a slapstick cartoon character, Tom has a superhuman level of elasticity. Tom is usually defeated (or very rarely, killed, like in Mouse Trouble, where he explodes) in the end, although there are some stories where he outwits and defeats Jerry.

Tom has variously been portrayed as a malicious tormentor and a victim of Jerry's blackmail attempts, sometimes within the same short.

Anchors Aweigh and Dangerous When Wet

Tom and Jerry appeared together in the 1945 Technicolor Metro-Goldwyn-Mayer musical Anchors Aweigh where Tom briefly appears as a butler for King Jerry, the latter who has a dance sequence with Gene Kelly, and also in another musical with the same studio Dangerous When Wet (1953), where, in a dream sequence, main character Katie Higgins (Esther Williams) does an underwater ballet with Tom and Jerry, as well as animated depictions of the different people in her life.