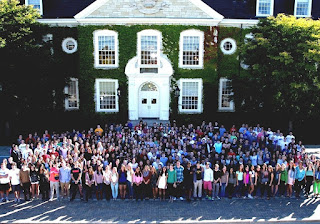 The current LFHS was built in 1935. The most recent addition took place in 2008, and was responsible for the adding of a commons area, a new lunchroom and a music wing as well as other minor adjustments.

The high school has both a studio theater and auditorium, as well as a television studio with 5,500 videotapes. It also has computer labs, computerized library with CD-ROM retrieval, student publication facilities, photography lab, and special education facilities. Sports facilities include a field house, climbing wall, Olympic-size swimming pool with a diving well and student gym.

The grounds include a large front lawn (used for field hockey, lacrosse, and ultimate) and a full-sized track and football field with 2 sets of bleachers. Because the school is situated very close to residential areas, the City of Lake Forest does not permit the school's football team to use floodlights, effectively prohibiting night games; however, in 2006, the city did allow the school to rent lights for a one-time night game. A 2007 referendum relocated the school's football facilities to the school's west campus, where the use of floodlights is not prohibited. The referendum passed by an overwhelming 2/3 majority, and renovations took place in two phases. The first phase, completed during the 2007/2008 school year, included the addition of a music wing, and renovation of the west campus including construction of a Varsity field. The second phase, completed in August 2008, included academic renovations at the east campus with a brand new dining room, a large atrium or "The Commons" and library, and construction of administrative offices at the west campus, additionally at West campus a new football field complete with floodlights and astro turf was built, now allowing night games. Prior to this, a first referendum was passed on November 7, 2006 unanimously by the Lake Forest High School Board of Education. This referendum was later passed on to the rest of the community and appropriated $54 million to be paid back over the next 20 years.

In 2005, Lake Forest graduated 98.9% of its senior class. It has been included in the "Top million" and "Most Successful" lists of the National Association of Secondary School Principals, The New York Times, The Washington Post, and Parade magazine. The average class size is 19.3. Lake Forest has made Adequate Yearly Progress on the Prairie State Achievements Examination, a state test part of the No Child Left Behind Act.

The average tenure of faculty members is 11.3 years with 96% of the faculty holding a master's degree or higher. There are 156 certified staff members, creating a student to staff ratio of 12.7

Lake Forest High School has won 71 state championships in athletics, 43 since 2000. In their 2010-2011 season, the Scouts won three state championships. The school's Varsity Dance Team (Pom Pons) won the 2013 and 2014 Large Varsity Pom National Champions at the National Dance Team Competition. The Girl's Varsity Tennis Team has won 2 state titles in the past 3 years, and the Varsity Field Hockey was state champions in 2012. The Girls Ice Hockey team won the state titles in 2011 and 2013. The 2013/14 Girl's Varsity Soccer team also won a state title in penalty kicks. The Scouts get a lot of financial help from the LFHS Booster Club.

The 1980 film Ordinary People is set in nearby Lake Bluff, and parts of the film were shot at the school; however all swim team scenes were filmed at nearby Lake Forest College.