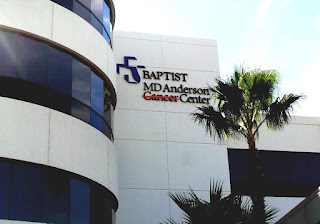 It is both a degree-granting academic institution, and a cancer treatment and research center located at the Texas Medical Center in Houston. It is one of the few hospitals in the US affiliated with two major research based medical schools: The University of Texas Health Science Center at Houston, and Baylor College of Medicine. It has an endowment of $486 million as of November 30, 2014.

MD Anderson was created by an act of the Texas Legislature in 1941, making it a part of The University of Texas System and was established by the National Cancer Act of 1971. Today it is one of 45 Comprehensive Cancer Centers designated by the National Cancer Institute. The cancer center provided care for about 127,000 patients in Fiscal Year 2014 and employs more than 20,000 people.

The cancer center is named after Monroe Dunaway Anderson, a banker and cotton trader from Jackson, Tennessee. He was a member of a business partnership with his brother-in-law Will Clayton. Their company became the largest cotton company in the world. Anderson feared that in the event of one of the partners' deaths, the company would lose a large amount of money to estate tax and be forced to dissolve. To avoid this, Anderson created the MD Anderson Foundation with an initial sum of $300,000. In 1939 after Anderson's death, the foundation received $19 million.

Using surplus World War II Army barracks, the hospital operated for 10 years from a converted residence and 46 beds leased in a Houston hospital before moving to its current location in 1954.

The institution became the subject of controversy in 2005, when it leased the use of its name to private investors who intended to promote a particular therapeutic approach, proton therapy. An article in the Houston Chronicle suggested that the arrangement between the Center and the investors might skew incentives, providing M.D. Anderson with non-medical reasons to "send as many patients as possible into the program."

MD Anderson is focused on research on causes, treatments, and prevention of cancer, with the stated mission of "Making Cancer History." In FY 2014, about 8,000 patients participated in therapeutic clinical research exploring novel treatments, making it the largest program of its kind in the United States.

Being part of The University of Texas System, MD Anderson Cancer Center is managed under a nonprofit structure; however, for-profit agreements have caused some to question the motives of the center.

In addition to its No. 1 ranking in cancer care by U.S. News & World Report, the cancer center ranks first in the number of National Cancer Institute grants and invested more than $735 million in research in FY 2014. The cancer center also has received Magnet Nursing recognition from the American Nurses Credentialing Center.

In May 1996, the Pan American Health Organization (PAHO/WHO) established the Collaborating Center for Supportive Cancer Care at the Pain Research Group, The University of Texas M. D. Anderson Cancer Center. The terms of reference engage the Anderson Center in the development of palliative care programs throughout Latin America and the Caribbean.

MD Anderson has had four full-time presidents in its history:

Mendelsohn stepped down from his position on Sept. 1, 2011, when Ronald A. DePinho, M.D., became president. Mendelsohn remains on the faculty as co-director of the new Sheikh Khalifa Bin Zayed Al Nahyan Institute for Personalized Cancer Therapy.

The cancer center continues to grow, increasing in size by 50% in the past 10 years. The complex now includes more than 600 inpatient beds, several research buildings and outpatient clinic buildings, two faculty office buildings, and a patient-family hotel in addition to other off-site facilities for clinical and research use.

Recently completed construction projects include two new research buildings on MD Anderson's South Campus and the addition of nine floors that can accommodate more than 300 new inpatient beds in Alkek Hospital on the North Campus.

In 2012 the Houston Main Building (originally the Prudential Building) was demolished, with plans to redevelop the site. The building had originally been purchased by MD Anderson in 1974 for $18.5 million.

MD Anderson Cancer Center Madrid is a venture between MDA Holding Spain, S.A., a Spanish investment consortium, and the MD Anderson Outreach Corporation, a health care organization created in 1989 to open and expand access to MD Anderson's internationally recognized standard of cancer care. Funding was provided by participants in Madrid.

MD Anderson Outreach Corporation has two seats on the 11-member board of directors of MDA Holding Company. The two board seats have significant "reserve powers," which mandate that both representatives approve certain decisions such as those related to quality assurance.

The South Campus is home to the McCombs Institute for the Early Detection and Treatment of Cancer, which includes seven translational research centers focused on genomics, proteomics, screening, diagnostic imaging and drug development.

The World's most recently posted photos of texas and utmdacc .... Source : hiveminer.com