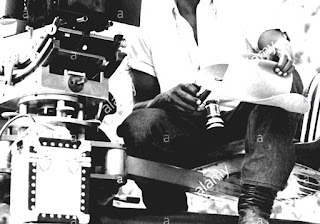 The Learning Tree (1969) is a film written and directed by Gordon Parks, a celebrated photographer.Â  It depicts the life of Newt Winger, a teenager growing up in Cherokee Flats, Kansas, in the 1920s, and chronicles his journey into manhood that is marked by tragic events. The Learning Tree is based on Parksâ€™ autobiographical novel of the same name, which was published in 1963.Â  Produced by Winger Enterprises, The Learning Tree was one of the earliest examples of Blaxploitation films.

Newt Winger, Marcus Savage, and several of their friends steal apples from Jake Kinerâ€™s orchard, and when Kiner confronts the boys, he is beaten and left for dead by Marcus, who is later sent to jail for his actions.Â While Marcus is in jail, Newt begins to work for Kiner to make up for his actions and those of his friends, and also begins a relationship with the new girl in town Arcella Jefferson, but his relationship with her is ultimately destroyed when Chauncey Cavanaugh, a white man and son of the local judge, rapes and impregnates Arcella, who ultimately moves away out of shame.Â

One day when Newt is eating his lunch in the loft of Kinerâ€™s barn, he witnesses the brutal attack and murder of Kiner by Booker Savage, Marcusâ€™ father.Â  Newt initially keeps quiet about what he has seen, but appears to be bothered that Silas Newhall, who was at the scene of the crime for another reason, is being accused for a murder he did not commit.Â  Encouraged by his mother Sarah, Newt reveals to Judge Cavanaugh that Booker committed the murder, and also testifies in court, but rather than doing the good he intended it to do, Newtâ€™s testimony leads to the suicide of Booker and almost being killed by Marcus.

Through all this, the film is able to capture â€œan adolescent boyâ€™s initiation in sex, love, death, justice and injustice, and, because he is black, a fair measure of racial hatredâ€ in â€œa profoundly nostalgic way,â€ according to New York Times movie reviewer, Roger Greenspun.

The film The Learning Tree is based on Gordon Parksâ€™ 1963 autobiographical novel of the same name.Â Parks also wrote the screenplay, and as a result, the script for the movie did not deviate much from the book, except for fewer characters for the sake of time.Â  In addition to being the screenwriter, he was also the director, producer, and music composer.Â  Assisting him with directing were Jack Aldworth and Fred Giles.Â  Also working with Parks was James Lydon as associate producer and Burnett Guffey as cinematographer.Â  Interestingly, these men tried to include as many black technicians as possible for the film.

Parks personally chose Kyle Johnson to play the character of Newt, after a brief meeting with him in a Beverly Hills hotel.Â  However, during the meeting, he gave no inclination that he wanted to cast Johnson, but Johnson kept getting called in from screen tests.Â  After the fourth screen test, he found out that he had already been hired and the screen tests were meant to gauge the abilities of the other actors, not him.Â Not surprisingly, Johnson characterized the audition process as â€œnot normal.â€

According to Turner Classic Movies, the original name of the film was Learn, Baby, Learn before it was changed to its current name.Â  The current title appears to be taken from a line in the film, one that Sarah Winger tells her son Newt: â€œLet Cherokee Flats be your learning tree.â€Â  In context, the title of the film appears to signify that no matter where Newt lives in life, the lessons he learned in Cherokee Flats would guide his actions.Â Â

The Learning Tree was shot on location in Fort Scott, Kansas in the fall of 1968, and the production process was scheduled to take three months.Â Fort Scott had been where Parks grew up, and it was also the basis for the fictional town of Cherokee Flats.

Additionally, Johnson recalls that his â€œmost enjoyable work as an actorâ€ was done under Gordon Parks.Â  Specifically, Johnson says, â€œI really enjoyed The Learning Tree, for me it was like being part of a tight run ship, a well oiled machine, you do your part and you recognize it's importance and relationship to all the other parts, cast, crew, director and so forth.â€

During the film production, â€œsuitsâ€ from Warner Brothers often visited the set.Â  Since Parks was an African American director, Warner Brothers sent representatives over to check up on Parks and to make sure that production was running smoothly.

In 1879, many African Africans migrated to Kansas and they became known as the â€œExodusters.â€Â  Among those who traveled were the ancestors of Gordon Parks.Â  His father, Andrew Jackson Parks, was a tenant farmer in Kansas.Â Given that Gordon Parks was born in Fort Scott, Kansas in 1912, he was the â€œissue of the second generation of exodusters.â€Â  His ancestral background played a role in choosing Fort Scott as the filming location for The Learning Tree.

The Exodusters earned their name after nearly 6,000 African Americans migrated to Kansas after the Emancipation.Â  Their exodus was prompted by the 1879 Windom Resolution that encouraged African Americans to leave the southern states where they were still met with much hatred, even though the American Civil War had ended a little more than a decade earlier.Â  Kansas promised a fresh start for the Exodusters, who wanted to begin a new life, in a new land, away from the southerners who had once enslaved them.Â Â

The Learning Tree juxtaposes the lives of Newt Winger and Marcus Savage, two former friends that are trying to find themselves in a white dominated Midwestern society.Â  Though these two young men have different personalities and different goals in life, both characters represent two examples of black manhood.

Newt is a young man who tries to adhere to morals, although upset by the racial injustice of the day. When adversity occurs, he always acts with dignity.Â When he and his friends steal from Jake Kiner, he attempts to make amends by working for him pro bono.Â  When Chauncey Cavanaugh takes a liking to Newtâ€™s girlfriend Arcella, he does his best to protect her and ultimately he comes to term with his loss without showing aggression.Â  He tells the truth in the Kiner murder trial, even though it exposes Booker Savage as the killer and African Americans are subsequently shown in an unfavorable light.Â  Newtâ€™s determination to act morally shows that he is trying to feel empowered by doing the right thing.Â  His desire to pursue a college education is, according to scholar Aza Nedhari, a healthy way in which black males may feel empowered.

On the contrary, Marcus is a young man who is also upset by the racial injustice of the day, but retaliates with violence.Â  His rocky relationship with his father, Booker, does not help his psyche and predisposes him to violence. Nedhari suggests that â€œboys who are victims of patriarchy often become the world views of patriarchy, unconsciously embodying the abusiveness that they recognized as evil.â€Â In the case of Marcus, he begins to embody violence, specifically when he beats Kiner and attempts to murder Newt for sending both him and his father to jail.Â  According to Nedhari, violence is one way that underprivileged black males find themselves.

Gordon Parks composed and wrote the following songs in The Learning Tree:

The rich music only adds to the rich cinematography seen in the film, and New York Times reviewer Roger Greenspun praised it in his review, saying that the music â€œtelegraphs and then drains each crisis.â€Â  This strong attention to music helps add more meaning to each scene.Â Â

When The Learning Tree premiered at the Trans-Lux Theater in New York City on August 6, 1969, it was well received by critics.Â  Greenspun commented in his review that the scenes in the film took on a â€œkind of ceremonial vitality and lifelikeness.â€Â  Parks and Guffeyâ€™s strong attention to detail helped to make this film beloved and well-remembered to the American public.

According to Turner Classic Movies, The Learning Tree was one of the first twenty-five films to be listed on National Film Registry.Â Â