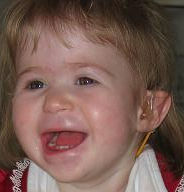 The condition is caused by a genetic deletion (loss of a segment of DNA) on the outermost band on the short arm (p) of chromosome 1. It is one of the most common deletion syndromes. It is estimated that the syndrome occurs in one in every 5,000 to 10,000 births. Knowledge of the disorder has increased a great deal over the last decade, mainly because more patients have been accurately diagnosed and described in international medical literature.

The facial features of 1p36 deletion syndrome have been considered to be characteristic, although few patients have been diagnosed solely on the basis of facial appearance. These features may include microcephaly, small, possibly slanted, deep-set eyes, a flat nose and nasal bridge, anomalous, low-set and small ears, a small mouth with down-turned corners and a pointed chin. Distinguishing features in another study were a large or late-closing anterior fontanelle (up to 85% of patients) and facial asymmetry.

The first cases of 1p36 deletion syndrome were described in the 1980s. However, since many of these individuals also had other chromosomal imbalances, symptoms varied widely. The reason it took so long to recognize the condition as a distinct chromosome deletion syndrome is that the deletions causing the disorder are too small to be detected in a routine chromosomal analysis. FISH (fluorescent in situ hybridization) and DNA-based technology known as MLPA (multiple ligation probe amplification) used in testing have aided in diagnosing an increasing number of cases since the 1990s.

The breakpoints for 1p36 Deletion Syndrome have been variable and are most commonly found from 1p36.13 to 1p36.33. 40 percent of all breakpoints occur 3 to 5 million base pairs from the telomere. The size of the deletion ranges from approximately 1.5 million base pairs to greater than 10 million. Studies have suggested that the larger the deletion, the more severe the symptoms exhibited in the individual, but this has not been proven definitively.

Most deletions in chromosome 1p36 are new mutations, that occur before fertilization, during the formation of gametes (eggs or sperm). There have also been reports of patients with 1p36 deletion syndrome whose parents have a balanced or symmetrical translocation. This means a portion of one chromosome is transferred to another chromosome, so the parent has the "36" portion of chromosome 1 attached in an alternate location. When this occurs, cell division creates gametes that are missing a piece of 36.

In new mutations, the mechanism causing chromosome breakage is unknown. Deletions of paternal origin (father) are larger than the deletions deriving from the maternal (mother) chromosome. The majority of deletions are maternally derived. There do not seem to be differences in the clinical manifestations (the symptoms or observable conditions which are seen as a result of 1p36) based on whether the deletion is on the paternal or maternal chromosome.

Most young children with 1p36 deletion syndrome have delayed development. They sit up, walk and talk later than typical children. Speech is severely affected, with many patients learning only a few words. It was originally thought that the degree of the delay and the ability to acquire complex speech was somewhat dependent on deletion size. Reports of a milder learning disability in children with smaller deletions have suggested that there may be a correlation between deletion size and mental ability; however, this requires further investigation and research. Recent research by Dr Lisa Shaffer has shown however that there is no correlation between deletion size and degree of developmental delay. This suggests that the most genetically potent area of the 1P36 chromosome occurs at the terminal end of the chromosome.

Many children with 1p36 deletion syndrome have behavioral problems. Some of these include temper outbursts, banging or throwing objects, striking people, screaming episodes, and self-injurious behavior (wrist biting, head striking/banging). Autistic behavior has also been noted in some children. Also, some parents have described behaviors such as a love of water, although there have not been any studies into this yet.

Many children with 1p36 deletion syndrome have oropharyngeal dysphagia which is characterized by difficulty in initiating a swallow. Some of the other feeding issues include poor sucking and swallowing, reflux, and vomiting in infancy. Many require nasalgastric or gastric tubes to ensure they are receiving sufficient nutrition.

Brain imaging has documented cerebral atrophy, which is a loss of neurons in the brain and the connections between them. Also documented were problems with the ventricular system in the brain, such as ventricular asymmetry and ventricular enlargement. Hydrocephalus has also been noted in children with 1p36 deletion syndrome. This is basically too much fluid within the brain. Hyperreflexia, which is defined as overactive or overresponsive reflexes in the body, was also found to be common. Many children also have epilepsy which is a disorder of the brain that results in recurrent, unprovoked seizures.

Microcephaly is a disorder in which the circumference of the head is smaller than average for the person's age and gender. Most children with microcephaly also have a smaller than typical brain and intellectual disability. Some of the most common signs and symptoms associated with microcephaly are seizures, poor feeding, high pitched cry, intellectual disability, developmental delay, and increased movement of arms and legs.

Vision abnormalities in children with 1p36 have been wide-ranging, including:

Children with 1p36 deletion syndrome are all unique individuals, but do have some common distinct facial features such as:

There are many growth abnormalities associated with 1p36 deletion syndrome. One common problem is delayed growth or difficulty in gaining weight. Even though some of the children may eat well, they still may not grow normally. In contrast, some children may develop hyperphagia, which is overeating, and may become obese. These children clinically resemble children with Prader-Willi syndrome. Developmental delay has also been severe in the patients with the Prader-Willi like characteristics.

Dilation of the renal collecting system

The collecting system is the structure that collects urine directly from the kidney tissue and routes it by way of the ureter to the bladder. Structural renal abnormalities are rare in both sexes.

Hearing loss affects approximately two thirds of 1p36 deletion patients. It can be of different types. Sensorineural hearing loss is a type of hearing impairment caused by damage that occurs to the inner ear (cochlea) or to the nerve used for hearing (vestibulocochlear nerve). Conductive hearing loss is a hearing loss associated with the functioning of the outer or middle ear. This type is most common in children with 1p36 deletion syndrome. It ranges from mild loss at various frequencies, to severe loss at all frequencies.

Puberty in children with 1p36 deletion syndrome can be early, normal, or delayed.

Only a few spinal deformities have been seen in children with 1p36. The deformities found are:

Although 1p36 Deletion Syndrome can be debilitating in many ways, patients do respond to various treatments and therapies. These include the following:

American Sign Language: Because few individuals with Monosomy 1p36 develop complex speech, an alternate form of communication is critical to development. Most patients can learn basic signs to communicate their needs and wants. This also appears to reduce frustration and may reduce self-injurious tendencies. Children with hearing loss will often qualify for locally sponsored sign language classes.

Music: Music has been shown to aid children with 1p36 deletion in various developmental areas. It serves as an excellent auditory stimulus and can teach listening skills. Songs with actions help the child to develop coordination and motor skills.

Physical Therapy: Due to low muscle tone, patients with 1p36 Deletions take a great deal of time to learn to roll over, sit up, crawl and walk. However, regular physical therapy has shown to shorten the length of time needed to achieve each of those developmental milestones.