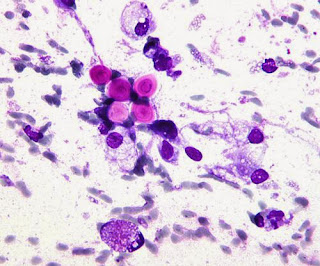 Cryptococcosis, or cryptococcal disease, is a potentially fatal fungal disease. It is caused by one of two species; Cryptococcus neoformans and Cryptococcus gattii. These were all previously thought to be subspecies of C. neoformans but have now been identified as distinct species.

Cryptococcosis is a defining opportunistic infection for AIDS, and is the second-most-common AIDS-defining illness in Africa. Other conditions that pose an increased risk include certain lymphomas (e.g., Hodgkin's lymphoma), sarcoidosis, liver cirrhosis, and patients on long-term corticosteroid therapy.

Distribution is worldwide in soil. The prevalence of cryptococcosis has been increasing over the past 20 years for many reasons, including the increase in incidence of AIDS and the expanded use of immunosuppressive drugs.

Cryptococcal meningitis (infection of the meninges, the tissue covering the brain) is believed to result from dissemination of the fungus from either an observed or unappreciated pulmonary infection. Often there is also silent dissemination throughout the brain when meningitis is present. Cryptococcus gattii causes infections in immunocompetent people (fully functioning immune system), but C. neoformans v. grubii, and v. neoformans usually only cause clinically evident infections in persons with some form of defect in their immune systems (immunocompromised persons). People with defects in their cell-mediated immunity, for example, people with AIDS, are especially susceptible to disseminated cryptococcosis. Cryptococcosis is often fatal, even if treated. It is estimated that the three-month case-fatality rate is 9% in high-income regions, 55% in low/middle-income regions, and 70% in sub-Saharan Africa. As of 2009 there were globally approximately 958,000 annual cases and 625,000 deaths within three months after infection.

Although the most common presentation of cryptococcosis is of C. neoformans infection in an immunocompromised person (such as persons living with AIDS), the C. gattii is being increasingly recognised as a pathogen in what is presumed to be immunocompetent hosts, especially in Canada and Australia. This may be due to rare exposure and high pathogenicity, or to unrecognised isolated defects in immunity, specific for this organism. Dependent on the infectious syndrome, symptoms include fever, fatigue, dry cough, headache, blurred vision, and confusion. Symptom onset is often subacute, progressively worsened over several weeks. The two most common presentations are meningitis (an infection in and around the brain) and pulmonary (lung) infection.

Cryptococcosis can rarely occur in the non-immunosuppressed people, particularly with Cryptococcus gattii.

Cryptococcosis is a very subacute infection with a prolonged subclinical phase lasting weeks to months in persons with HIV/AIDS before the onset of symptomatic meningitis. In Sub-Saharan Africa, the prevalence rates of detectable cryptococcal antigen in perpheral blood is often 4-12% in persons with CD4 counts lower than 100 cells/mcL. Cryptococcal antigen screen and preemptive treatment with fluconazole is cost saving to the healthcare system by avoiding cryptococcal meningitis. The World Health Organization recommends cryptococcal antigen screening in HIV-infected persons entering care with CD4<100 cells/Î¼L. This undetected subclinical cryptococcal (if not preemptively treated with anti-fungal therapy) will often go on to develop cryptococcal meningitis, despite receiving HIV therapy. Cryptococcosis accounts for 20-25% of the mortality after initiating HIV therapy in Africa. What is effective preemptive treatment is unknown, with the current recommendations on dose and duration based on expert opinion. Screening in the United States is controversial, with official guidelines not recommending screening, despite cost-effectiveness and a 3% U.S. cryptococcal antigen prevalence in CD4<100 cells/Î¼L.

Treatment options in persons without HIV-infection have not been well studied. Intravenous Amphotericin B combined with flucytosine by mouth is recommended.

Persons living with AIDS often have a greater burden of disease and higher mortality (30-70% at 10-weeks), but recommended therapy is with amphotericin B and flucytosine. Where flucytosine is not available (i.e. all low and middle income countries), fluconazole should be used adjunctively with amphotericin. Amphotericin-based induction therapy has much greater microbiologic activity than fluconazole monotherapy with 30% better survival at 10-weeks. Based on a systematic review of existing data, the most cost-effective induction treatment in resource-limited settings appears to be one week of amphotericin B coupled with high-dose fluconazole. After initial induction treatment as above, typical consolidation therapy is with oral fluconazole for at least 8 weeks used with secondary prophylaxis with fluconazole thereafter.

The decision on when to start treatment for HIV appears to be very different than other opportunistic infections. A large multi-site trial supports deferring ART for 4â€"6 weeks was overall preferable with 15% better 1-year survival than earlier ART initiation at 1â€"2 weeks after diagnosis. A Cochrane review also supports the delayed starting of treatment until crytococcosis starts improving with antifungal treatment.

IRIS in those with normal immune function

The immune reconstitution inflammatory syndrome (IRIS) has been described in those with normal immune function with meningitis caused by C. gattii and C. grubii. Several weeks or even months into appropriate treatment, there can be deterioration with worsening meningitis symptoms and progression or development of new neurological symptoms. IRIS is however much more common in those with poor immune function (~25% vs. ~8%).

The increasing inflammation can cause brain injury or be fatal.

The mechanism behind IRIS in cryptococcal meningitis is primarily immunologic. With reversal of immunosuppression, there is paradoxical increased inflammation as the recovering immune system recognises the fungus. In severe IRIS cases, treatment with systemic corticosteroids has been utilized - although evidence-based data are lacking.

Cryptococcosis is also seen in cats and occasionally dogs. It is the most common deep fungal disease in cats, usually leading to chronic infection of the nose and sinuses, and skin ulcers. Cats may develop a bump over the bridge of the nose from local tissue inflammation. It can be associated with FeLV infection in cats. Cryptococcosis is most common in dogs and cats but cattle, sheep, goats, horses, wild animals, and birds can also be infected. Soil, fowl manure, and pigeon droppings are among the sources of infection.

Cryptococcal meningitis is a neglected disease, although cryptococcosis is rarely categorized individually and is simply grouped under HIV/AIDS-related deaths. There appears to be minimal interest in prevention or providing treatment of the disease as Cryptococcus primarily affects Africans and minorities. Cryptococcal meningitis is not transmissible person-to-person (i.e. non-communicable), and the fatality rate, even with treatment is often >50% in Africa, making the case-fatality rate as high or higher than Ebola.