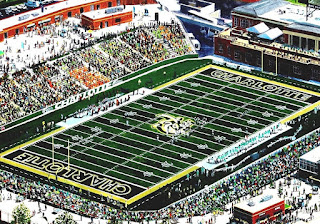 The Charlotte 49ers football program represents the University of North Carolina at Charlotte in college football. The UNC Charlotte Board of Trustees officially voted to add a football program on November 13, 2008, after a unanimous recommendation by the Football Feasibility Committee. It was made possible by Student Government initiatives starting in 2006 by then-Student Body President Benjamin Comstock and Student Body Vice President Jordan Van Dyne, namely the first step of organizing a transparent student vote on football that disclosed possible hikes in tuition fees as a result of football. The online poll was approved by the Student Senate and administered in collaboration with the University's IT Department. Despite the possibility of potential rises in student fees, the vote clearly displayed a student interest in a football team. The program began play during the 2013 NCAA Division I FCS football season.

In 1946, 22 young men began practice as the Charlotte Center of the University of North Carolina Owl's first athletic program: a football team. The team finished the season 2â€"4, with wins over Pembroke State and Belmont Abbey, and losses to Davidson JV, Catawba College JV, and Clemson's "B" team. The team hosted 2 home games that year at American Legion Memorial Stadium. In part due to the effects of fewer World War II veterans entering college in the late 1940s, the football program ended after the 1948 season. The final football game was played on October 27, 1948.

On July 12, 2006, a group of 15 UNCC students and alumni held the inaugural Charlotte 49er Football Initiative (CFI) meeting. The mission of this group was to "promote the creation of a Division 1 college football program at Charlotte," eventually employing methods such as a promotional website, merchandise sales and a pledge campaign. A student organization, Charlotte Football Advocates (later CFI Students), became a part of the larger CFI group during the fall of 2006. In February 2007, UNC Charlotte students voted overwhelmingly in favor of football in an official campus-wide vote and the UNC Charlotte Board of Trustees voted to authorize $150,000 to study adding 49ers Football, and establishing a Football Feasibility Committee to be headed by outgoing board president and prominent Charlotte businessman Mac Everett. The committee held several meetings throughout the summer of 2007, plus three public forums in the fall of 2007.

In December 2007, the Football Feasibility Committee voted unanimously to recommend the addition of 49ers football. In September 2008, a major student-led March to the Endzone rally was held on campus. On September 18, 2008, Chancellor Dubois officially recommended adding a 49ers football program with the condition that its fans first raise $5 million to help fund the stadium complex. On November 13, 2008, the UNC Charlotte Board of Trustees voted to add a Charlotte 49ers football program by 2013.

The 49ers played as an Independent during their two years in the FCS subdivision. Charlotte Football officially joined the FBS subdivision and C-USA Football on July 1, 2015.

Statistics correct as of week 3 of the 2017-18 college football season regular season.

Official record (including any NCAA imposed vacates and forfeits) against all current In-State NCAA Division I opponents:

Official record (including any NCAA imposed vacates and forfeits) against all current C-USA opponents:

Alumni currently in the NFL

To generate financial support for the launch of the football program, Chancellor Dubois created a program called Forty Niner Seat Licenses, or FSLs, which essentially served as seat deposits for season tickets. The Chancellor initially set forth a goal of 5,000 FSL reservations within 6 months. However, due to the tremendous level of support for the new program, the goal was met in only 2 months.

Chancellor Dubois originally recommended that the university start Division I football at the FCS (formerly Division I-AA) level with no timeline to move up to FBS. The team played their first full season in the fall of 2013 as an FCS Independent. On May 4, 2012 Charlotte agreed to rejoin Conference USA for all sports except football in 2013, with football joining in 2015 (the first year the 49ers would be eligible due to the NCAA requirement that start-up programs play a minimum of two years in FCS). Charlotte moved to the FBS in 2015 and will become FBS bowl eligible in 2016. The 49ers were founding members of C-USA from 1996â€"2005. Other schools to join C-USA with Charlotte include Florida Atlantic University, Florida International University, Louisiana Tech University, University of Texas at San Antonio, University of North Texas, and Old Dominion University.

Chancellor Dubois conducted a lengthy review process of the committee's results before making his final recommendation to the Board of Trustees. He presented the findings of his own internal review to the board at a June meeting which included estimates from stadium design firm Populous. The estimates significantly increased facilities construction numbers from the feasibility committee figures. They were also significantly higher than those for a much larger facility recently constructed for the University of Central Florida's Bright House Stadium.

On February 12, 2010, the University of North Carolina Board of Governors approved a debt service fee increase to fund the construction of the football stadium and football center, and on August 2, 2010 Governor Bev Perdue signed the debt service fee bill into law to clear the way for stadium construction. Designed by the architecture teams of Jenkins-Peer Architects and the DLR Group, its location was shown near the campus entrance at Highway 29 north of Hayes Stadium. On April 28, 2011 Charlotte held a groundbreaking ceremony for the football stadium. The stadium was completed in summer 2012. The 49ers' first game was a 52-7 win over Campbell on August 31, 2013.

Announced schedules as of September 7, 2016

The largest crowd for a Charlotte football game at Jerry Richardson Stadium was 18,651, set in the season home opener in 2017.The previous record was 17,444, which the 49ers achieved in the 2015 season.