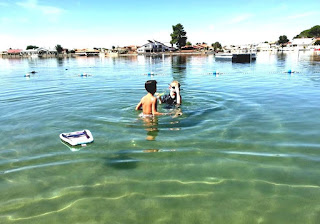 Helendale or Silver Lakes is an unincorporated community and census-designated place located in the Victor Valley of the Mojave Desert, within San Bernardino County, California.

Several Native American tribes lived in the area, namely the Mojave and Serrano. It is believed that the first White man to travel through was the Franciscan priest Francisco GarcÃ©s in 1776. He was exploring a route to the missions on the Coast following the Mojave River.

The original name for Helendale was Point of Rocks. There were several early trails and roadways through this area of the Mojave Desert, including the Mojave Trail, which was used by the Indians and Father GarcÃ©s, the Spanish Trail, the Santa Fe Trail, the Mormon Trail, et cetera.

After Father GarcÃ©s, Jedediah Smith traveled through the Point of Rocks area in 1826 on a fur trapping expedition. In 1844, John C. FrÃ©mont and his guide, Kit Carson, traveled through heading east via the Cajon Pass. During the Mexicanâ€"American War, in late 1846 or early 1847, the Mormon Battalion camped at Point of Rocks on their way to Los Angeles. They were released from the military shortly afterward and part of the battalion returned to Salt Lake City through Point of Rocks.

The first Mormon wagon train traveled through in about 1851. In 1857, Edward Fitzgerald Beale and his camel driver, Hi Jolly, brought a famous caravan through on the way to Wilmington for the Camel Corps. After a few horse ridden mail conveyance companies during the 1850s went out of business, the short-lived Pony Express began its service in the early 1860s and a stone station was built by the river at Point of Rocks. The stagecoach station at Point of Rocks was located west of where the railroad tracks were later put down. In about 1863, the station was burned by Paiute Indians of the Shoshone branch.

The Santa Fe Railroad arrived in the 1880s and built a Point of Rocks station, which provided a watering stop for the steam engine locomotives then moving trains across the High Desert. On December 15, 1897, the name was changed to Helen in honor of Helen A. Wells (born 1885), daughter of railroad executive Arthur G. Wells (1861â€"1932). On September 22, 1918, the name was changed to Helendale.

Route 66, or National Trails Highway, was paved and officially opened in the Helendale area in 1926. Helendale has a historical marker commemorating the old road that is located 100 yards south of the intersection of Route 66 and Vista Road.

In 1969, construction began on two manmade lakes, North Lake and South Lake, covering approximately 277 acres (1.12Â km2), and a resort community called Silver Lakes was built at Helendale that opened in the early 1970s. The ZIP Code is 92342 and the community is inside area code 760.

Helendale is located in a generally flat area in the Mojave Desert, between Victorville and Barstow. It is located 100 miles (160Â km) northeast of Los Angeles and 180 miles (290Â km) southwest of Las Vegas. Silver Lakes sits at an elevation of 2,464 feet (751Â m).

Helendale is located at elevation of 2,430 feet (740Â m) above sea level. The town consists primarily of the Silver Lakes resort community, which is built around two manmade lakes. Water for these lakes comes from Mojave River, which, while dry at the surface, has flow underground.

Helendale is in a desert climate. Like most of the Mojave Desert, it has cool winters and hot summers and very little rainfall. It often will remain dry while nearby Victorville and Barstow are experiencing flash floods. For this reason, natives called the area "The hole in the sky."

Law enforcement is provided by the San Bernardino County Sheriff's Department out of the Adelanto Station. Traffic enforcement is provided by the California Highway Patrol. The San Bernardino County Fire Department maintains a full-time station with paramedics near the Post Office on Helendale Road. Private security firms are hired by the Silverlakes Association and consistently patrol the amenities of Silver Lakes.

According to the 2010 United States Census, Silver Lakes had a median household income of $67,214, with 12.1% of the population living below the federal poverty line.