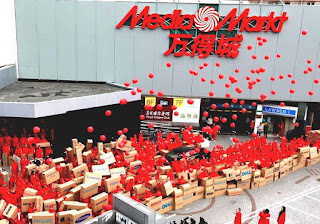 Media Markt was founded by entrepreneurs Leopold Stiefel, Walter Gunz, Erich Kellerhals, and Helga Kellerhals. The first store opened on 24 November 1979 in Munich. Today it is owned by Media-Saturn Holding, which also owns the Saturn chain. Media Markt and Saturn operate in mostly the same markets but with different concepts, and as competitors.

Media-Saturn Holding in turn is owned by the German retail company Metro AG.

Media Markt's main slogan "Ich bin doch nicht blÃ¶d" (Hey, I'm not stupid) has been translated into the languages of the other countries where the company operates (except Italy, China and Russia):

Prior to the 2006 World Cup, Media Markt launched a campaign, claiming to be the "best fan supplier" ("Bester FanausrÃ¼ster"), with commercials showing international football fans shopping at Media Markt, showing exaggerated stereotypes of the participating countries, and making fun of the Austria team, which did not qualify. This included a French seductress, Dutch fans smoking marijuana in caravans, or a Saudi haggling - to pay more. German fans were portrayed with big bellies, asking for refrigerators to keep their beer cool, rather than looking for a new TV set.

An additional series of ads, promoting a rebate of â‚¬10 for each goal Germany scores (except penalty shoot-outs), showed international soccer fans begging the Germans to score as many goals as possible - against their own team.

When the Netherlands lost to Portugal, Media Markt used a quote from a 1980s show featuring Rudi Carrell, a Dutchman who was a long-time TV celebrity in Germany, to express Schadenfreude. A World Cup trophy is shown to grieving Dutch fans in their caravan with the comment "This would have been your prize!".

In March 2006, the "Poland version" showed moustache-wearing Polish customers praising the shop for "prices deep like Polish soul" before hugging the German sales managers, who looked quite uncomfortable in the bear hugs. Afterwards, one of the Germans pointed out that his watch was still there, and that "The Pole is an honest person, after all". Then, the three men are shown to be missing their trousers.

This commercial caused a scandal in Poland, for the widely known German stereotype of Poles being thieves. Media Markt argued that the advertisements also made fun of other national clichÃ©s, including Germans, and none of the other clichÃ©s were perceived as negative towards the people they presented. Its aim was to exaggerate the clichÃ© of the Polish thief to dismiss it as unjustified prejudice, Media Markt claimed.

The store apologised and withdrew the advert after their Polish branch asked to do so, following protests in Poland, a call from the Polish embassy in Berlin and protests from German Polonia.

In January 2008 Media Markt launched a campaign presenting a fictitious country called "Dumb Land", where several characters with Eastern European accents were presented as being from this country, which even has an anthem. A central theme of this campaign presented a Boy Scout as an idiot. This really upset people as many consider Scouts to be responsible and valued members of society. An online petition was created to persuade Media Markt to withdraw the campaign and to offer a public apology. Due to this petition and a lot of pressure from the Scouting movement, Media Markt had to remove the Boy Scout from their campaign, including TV and radio ads.

Turkish Union Association in EskiÅŸehir, Turkey motivated suspension of an advertisement campaign by the group on grounds that Media Markt "insulted Turkishness" by depicting consumers that purchased overpriced merchandise with animal heads. A ban of the advertisements lasted for 3 months in 2009. There have been many accusations on their official Facebook fan page about their false product advertisements in Turkey

Media Markt trades in Italy under the Media World brand name, and uses a different claim, Voglio il mondo (I want the world). It is the second main market for the brand, with 110 shops.

A former German campaign played on the German expression "saubillig" which means extremely cheap, but literally "sow (female pig) cheap". Sau- is a common emphasising prefix in colloquial German. Inside the stores the entrances were signposted as "Schweingang" = wordplay on the word Eingang (Entrance) and Schwein (pig), and the exit as "Sausgang" = wordplay on the word Ausgang (Exit) and the German word for sow (Sau) - the female pig.

Media Markt is closing in Sweden 2017.

Every store is 10% owned by the store manager. Store managers have discretion as to which products to stock, range, pricing, personnel and material costs.