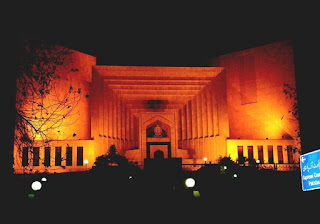 Designed by famous Japanese architect, KenzÅ Tange, under the consultation of the EPA, the complex was engineered and built by the CDA Engineering and Siemens Engineering. The building was part of an effort by the government of Pakistan to incorporate modernism into the architecture of important government buildings, for which several world-renowned architects were invited; Tange, after initially rejecting the invitation, ultimately agreed to participate.