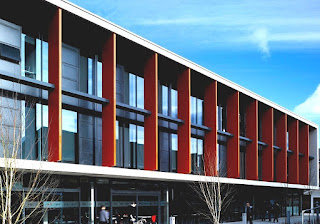 The National Film and Television School (NFTS) is a film, television and games school established in 1971 and based at Beaconsfield Studios in Beaconsfield, Buckinghamshire. It is featured in the 2017 ranking by The Hollywood Reporter of the top 15 International film schools.[1]

Its community of students makes around a hundred and fifty films a year on courses that are over 90% practical and unlike courses offered at other UK film schools. As of 2017 it had over 400 students and about a thousand a year on its short courses. Beaconsfield Studios comprises state-of-the art facilities including film and television stages; animation and production design studios; edit suites; sound post-production facilities; a music recording studio and three dubbing theatres, all furnished with current digital equipment comparable to that used in the film and television industry. The school completed an expansion and modernisation programme in early 2017 with new teaching facilities, a third cinema and a new 4K Television Studio that is the most advanced dedicated training facility in the UK with the ability to shoot, record and stream live content in high definition 4k.

The BBC stated that the NFTS was the "leading centre of excellence for education in film and television programme making", and noted that it was "relevant to the industry's present and future needs."[2] British Film Magazine once described the NFTS as being one of the few schools to come "very, very close" to guaranteeing a job in the film industry, and named its leader (Powell) a "maverick";[3] Filmmaking.net named it one of two films schools outside the US which had such a high international reputation.[4]

NFTS student films have been nominated for an Oscar three times in the last six years. Additionally, in 2017 NFTS graduation film, A Love Story, directed and co-written by Anushka Naanayakkara, won the British Short Animation BAFTA at the EE British Academy Film Awards making it the fourth year in a row that NFTS students have picked up this accolade. This is the second consecutive year that two of NFTS studentsâ€™ graduation films competed for the same prize with A Love Story up against The Alan Dimension directed & co-written by Jac Clinch. NFTS student films are regularly selected for the top film festivals around the world. This yearâ€™s highlights include selections at Cannes and Annecy Animation Festival and top prizes in nearly all the Royal Television Society categories for which they are eligible.

In 2016 the National Film and Television School won accolades in all three categories in the CILECT Prize, the global film school awards. This is the third time that the NFTS has taken top place in these prestigious awards having also won two out of three categories in 2015, and in 2013, the school made history by becoming the first institution to win first prize in all three categories. This year, 117 film schools submitted entries, which were voted on by 107 of the worldâ€™s major film and television schools from 57 countries.

The National Film School opened in 1971, the work of four years of planning to create an institution to train personnel for the British film industry. Department of Education and Science had in 1967 recommended the creation of a national film school for the UK, and in 1969 an inquiry led by Lord Lloyd of Hampstead began to develop plans.

In 1970 a Scot named Colin Young, then chairing the UCLA's Department of Theater Arts, was appointed as the School's first director. The NFS bought the old Beaconsfield Film Studios in Buckinghamshire and set about refitting it to professional industry standards. Young established four permanent departmentsâ€"production, camera, editing and soundâ€"and in 1971 accepted the first intake of 25 students.

The curriculum in the early days was loosely structured; sporadic seminars and workshops were secondary to production, with students spending most of their time doing what they had come to the School to doâ€"making films. But by the early 1980s, Young felt this system no longer served the students' best interests and a more structured curriculum was introduced. Links with the industry were strengthened to supply collaborative, financial and production expertise.

In the 1980s, the school officially changed its name to the National Film and Television School to incorporate the demand for courses in television production and has since added games to its remit. In 1982 the School launched a pilot project for re-training freelance industry professionals. This led to the establishment of the National Short Course Training Programme (now ShortCourses@NFTS), which has been running courses ever since on all areas of film and television production. By the early 1990s the school had modified its original stance on course structure, deciding to provide specialisation at the time of entry. The first year still offered a general course, followed in the next two years by focused training in one of the ten specialist areas (direction, writing, editing, camera, sound, animation, design, producing, documentary and composing).

Colin Young retired in 1992 and was succeeded by Henning Camre, formerly Head of the National Film School of Denmark. Camre aimed for more balanced numbers in each of the ten specialist areas, creating separate departments with their own head tutors and curricula. He secured a Lottery grant to install state-of-the-art equipment, supporting new production methods offered by innovations in technology and ensuring that graduates were trained on up-to-date equipment.

Camre was succeeded in 1998 by Stephen Bayly, an NFTS graduate and film producer (Richard III, Mrs Dalloway). His first move was to reorganise the curriculum to run over two years, instead of three. Recognising a growing trend towards a requirement for academic qualifications, he sought to achieve this. Eventually, The Royal College of Art agreed to validate the School's courses and 2000 saw the first intake of students who would graduate with an MA. In 2002, Bayly introduced the first of the shorter Diploma courses, established to meet an urgent Industry need for properly trained sound recordists.

September 2003 saw Nik Powell, one of the UK's leading producers, to take over from Bayly. Powell has rapidly expanded the programme of new courses, introducing Diplomas in Producing & Directing Television Entertainment (now an MA), Digital Post-Production, SFX/VFX, Writing & Producing Comedy Diploma, and Script Development (a partnership venture with The Script Factory). New courses for 2017 include MAâ€™s in Marketing for Film, TV & Games, Directing & Producing Science & Natural History, Production Technology and Creative Business for Entrepreneurs & Executives and Diplomas in Production Accounting, Directing Commercials and Graphics & Titles for Film & Television. Powell has reinvigorated the programme of visiting filmmakers, and set up a programme of masterclasses run at London cinemas for NFTS students and the public. He has also introduced a range of development deals with broadcasters and independent production

In 2016, the NFTS announced it had received funding to increase the capacity of its site in Beaconsfield including a state-of-the-art 4k Digital Content Production Training Studio and the addition of a number of new MA and Diploma courses including Directing & Producing Natural History & Science; Production Technology; Marketing for Film, TV & Games; Graphics & Titles for Television & Film and Creative Business for Entrepreneurs & Executives.

The NFTS holds yearly graduation shows at the BFI Southbank (formerly known as the National Film Theatre). These are highly selective and invite-only events which showcase the student's projects to scouts and industry professionals, ensuring that the students receive maximum exposure.[7]

Alumni of the National Film and Television School have gone on to win Oscars, BAFTAs and Emmys as well as film festival prizes from around the world. In the last 6 years student films The Confession (2011), Head Over Heels (2013), The Bigger Picture (2015) have gone on to be nominated for three Oscars, and the graduation film A Love Story won the 2017 BAFTA for Best Short Animation, the fourth year in a row an NFTS animation has won the category.[9] thT

In 2013 the NFTS graduation film "Miss Todd" won the Student Academy Award for Best Foreign Film presented by Academy of Motion Picture Arts and Sciences. This marked the sixth time the NFTS had won in this category, more than any other Film School outside of the United States. In 2016, The National Film and Television School once again affirmed its place as the number one international film school by winning accolades in all three categories in the CILECT Prize, the global film school awards. The NFTS won â€˜Best Documentaryâ€™ for The Archipelago, â€˜Best Animationâ€™ for Edmond and was awarded second prize in the â€˜Fictionâ€™ category for Patriot.

This is the third time that the NFTS has taken top place in these prestigious awards having also won two out of three categories in 2015, and in 2013, the school made history by becoming the first institution to win first prize in all three categories.

The school's facilities were expanded in 2008 with the addition of new teaching spaces, public spaces and a new cinema, designed by Glenn Howells Architects. Upon its completion in 2008, the strikingly modern three story building (see photo above) won a coveted RIBA prize.[10] In June 2009 it was formally named The Oswald Morris Building in honour of veteran cinematographer Ossie Morris.

Until its repeal in 1986, the school was funded partly through a tax on cinema ticket sales known as the Eady Levy, named after then UK Treasury official Sir Wilfred Eady. The NFTS has since been funded by the UK Government, via (today) the Department for Culture, Media and Sport, and the television and film industries.

Postgraduate students from the UK/EU/EEA can now apply for a loan to help with their studies at any UK university including the NFTS via the Student Loans Company â€" which will make a big difference for many who wish to come and study at the NFTS.

The school has around 90 full-time staff as well as many top tutors from within the industry.

The National Film and Television School has awarded over 20 fellowships since 1981 with ceremonies taking place at their graduation ceremony each year. The NFTS Fellowship is awarded in recognition of outstanding contribution to the British film and television industry.