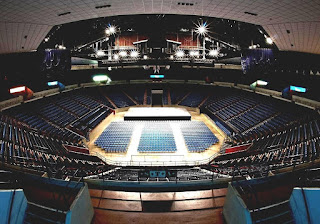 It was built in 1983 and is named in honor of Nat G. Kiefer, the late state senator who aided UNO's efforts to obtain state funding for the building. It is part of the university's East Campus, where most of the school's athletic facilities are located.

Lakefront arena is the home venue for both the New Orleans Privateers men's and women's basketball teams.

The arena is also notable for hosting Larry Bird's career-high of 60 points on March 12, 1985, against the Atlanta Hawks, who were hosting a series of special "home" games in New Orleans during the 1984â€"1985 season.

The Harlem Globetrotters have also played at the arena.

The UNO Aquatic Center is located in the arena and on the arena grounds. It has been home to the UNO men's and women's swimming and diving teams. The aquatic center has also hosted many national and state events including Sugar Bowl Swimming meets, AAU National Championships, LHSAA State meets, Syncro National competition, and hosted the 2010 Short Course and Long Course state meets.

From 2008 to 2011, the arena along with the Human Performance Center were the home venues for the New Orleans Privateers volleyball team.

Events held at the arena have included Disney on Ice, Sesame Street Live, Shrine Circus, So You Think You Can Dance: The Tour, WWE and Fox's singer search program The X Factor.

Comedians such as Bill Cosby, Robin Williams, Katt Williams and Dave Chappelle have performed at the venue.

Pope John Paul II celebrated mass to over 150,000 people on the grounds of the arena and prominent political figures such as Bill Clinton and John Kerry have also spoken at the arena.

Large festivals, including Lollapalooza and Steel Pony Express have also been held on the grounds.

In August 2005, as a result of massive damages sustained during Hurricane Katrina, the building closed for substantial repairs and renovations for nearly three years. During this time, the school's men's and women's basketball teams played their home games in their former home, the Human Performance Center (or "The Chamber of Horrors" as it grew to be known during the late '70s and early '80s).

The arena held its grand re-opening May 2, 2008. Disney's High School Musical: The Ice Tour was the first show to perform.