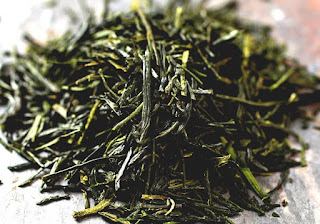 Sencha (ç…ŽèŒ¶) is a type of Japanese ryokucha (ç·'èŒ¶, green tea) which is prepared by infusing the processed whole tea leaves in hot water. This is as opposed to matcha (æŠ¹èŒ¶), powdered Japanese green tea, where the green tea powder is mixed with hot water and therefore the leaf itself is included in the beverage. Sencha is the most popular tea in Japan.

Among the types of Japanese green tea prepared by infusion, "sencha" is distinguished from such specific types as gyokuro and bancha. It is the most popular tea in Japan, representing about 80 percent of the tea produced in Japan.

The flavour depends upon the season and place where it is produced, but shincha, or "new tea" from the first flush of the year, is considered the most delicious. Tea-picking in Japan begins in the south, gradually moving north with the spring warmth. During the winter, tea plants store nutrients, and the tender new leaves which sprout in the spring contain concentrated nutrients. Shincha represents these tender new leaves. The shincha season, depending upon the region of the plantation, is from early April to late May, specifically the 88th day after Setsubun which usually falls around February 4, a cross-quarter day traditionally considered the start of spring in Japan. Setsubun or Risshun is the beginning of the sexagenary cycle; therefore, by drinking sencha one can enjoy a year of good health.

The ideal colour of the sencha beverage is a greenish golden colour. Depending upon the temperature of the water in which it is decocted, the flavour will be different, adding to the appeal of sencha. With relatively more temperate water, it is relatively mellow; with hot water, it is more astringent. Unground tea was brought from China after matcha (æŠ¹èŒ¶, powdered green tea). Some varieties expand when steeped to resemble leaf vegetable greens in smell, appearance, and taste.

The tea production process by which sencha and other Japanese ryokucha (ç·'èŒ¶, green tea) are created differs from Chinese green teas, which are initially pan-fired. Japanese green tea is first steamed for between 15â€"20 seconds to prevent oxidization of the leaves. Then, the leaves are rolled, shaped, and dried. This step creates the customary thin cylindrical shape of the tea. Finally, the leaves are sorted and divided into differing quality groups.

The initial steaming step imparts a difference in the flavour between Chinese and Japanese green tea, with Japanese green tea having a more vegetal, almost grassy flavour (some taste seaweed-like). Infusions from sencha and other green teas that are steamed (like most common Japanese green teas) are also greener in colour and slightly more bitter than Chinese-style green teas.

Shincha (æ–°èŒ¶), "new tea", represents the first month's harvest of sencha. Basically, it is the same as ichibancha (ä¸€ç•ªèŒ¶), "the first-picked tea," and is characterized by its fresh aroma and sweetness. "Ichibancha" distinguishes "shincha" from both "nibancha" ("the second-picked tea") and "sanbancha" ("the third-picked tea"). Use of the term "shincha" makes emphatically clear that this tea is the year's earliest, the first tea of the season. The opposite term is kocha (å¤èŒ¶), or "old tea," referring to tea left over from the previous year. Besides the fresh aroma of the young leaves, shincha is characterized by its relatively low content of bitter catechin and caffeine, and relatively high content of amino acid. Shincha is available only for a limited time. The earliest batch, from southern Japan, comes on the market around late April through May. It is popular in Japan, but is available in only limited amounts outside Japan. It is prized for its high vitamin content, sweetness, and grassy flavour with resinous aroma and minimal astringency.

Kabusecha (å† èŒ¶) is sencha grown in the shade to increase sweetness and relaxing amino acids, such as theanine. About a week before the tea leaf buds are picked in the spring, the plantation is covered with a screen to cut out the direct sunlight. This shading produces a milder tea than standard sencha. The shaded tea known as gyokuro differs from kabusecha in that it is shaded for a longer period: about 20 days.

Special nets (kabuse) are hung over the plants to obtain a natural shade without completely blocking out sunlight. Kabusecha Sencha has a mellower flavour and more subtle colour than Sencha grown in direct sunlight.