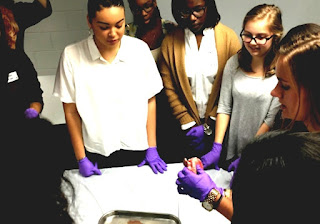 Some students who attended private schools in the 8th grade, such as Presbyterian School, chose to attend Middle College.

The school was established in fall 1994 at a Houston Community College (HCC) campus. Originally the school was affiliated with HCC.

In 1998 the school moved to a new location at 3100 Cleburne Street in conjunction with Texas Southern University: the new home was the School of Technology Building. After the Cleburne Street campus developed structural problems, the school later moved to the second floor of the campus of Thomas Middle School at 5655 Selinsky Street.

In fall 2006 the school closed. Some portions of the school were incorporated into Wheatley High School.

In 2007, after the fall 2006 closing, Johns Hopkins University referred to Middle College as a "dropout factory" where at least 40 percent of the entering freshman class does not make it to their senior year.