Home › Unlabelled › 4:13 Dream - The Cure Underneath The Stars Lyrics

4:13 Dream - The Cure Underneath The Stars Lyrics 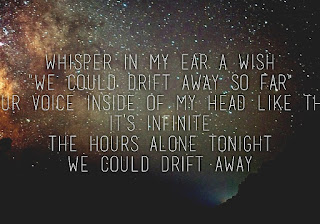 4:13 Dream is the 13th studio album by English rock band The Cure. It was released on 27 October 2008, through record labels Suretone and Geffen.

The thirteenth studio album by The Cure was originally intended to be a double album; however, frontman Robert Smith confirmed in interviews that this idea was scrapped, despite the fact that thirty-three songs had been recorded. Some songs featured on the album were recycled from earlier album sessions: an example is "Sleep When I'm Dead", which was originally written for the band's 1985 album The Head on the Door. Smith attested that the album would mostly comprise the upbeat songs the band recorded, while the darker songs may be released on another album.

On 6 October 2007, The Cure played the first song from the upcoming album, "The Only One" (then titled "Please Project") at the Download Festival in Mountain View, California as part of their 4Tour. Following this, the band slowly introduced other songs from the album. In order to finish recording 4:13 Dream by early 2008, they delayed their North American tour by eight months. Later in the tour, the band performed the songs "Underneath the Stars", "The Perfect Boy", "Sleep When I'm Dead", "Freakshow" (then titled "Don't Say Anything"), "The Only One" (then titled "Please Project") and "It's Over" (then titled "Baby Rag Dog Book") at various shows. Although rumored to appear on the album from early reports, another song, "A Boy I Never Knew", was omitted from the final track listing.

On 1 May 2008, The Cure posted a bulletin on their MySpace page in which they confirmed that the album would be released on 13 September. The bulletin also said that the thirteenth day of each month leading up to the release of the album (May, June, July and August) would see the release of a single, including B-sides that would not make the final cut.

The first single, "The Only One", was released on 13 May, followed by "Freakshow" on 13 June, "Sleep When I'm Dead" on 13 July and "The Perfect Boy" on 13 August. On 16 July, Robert Smith announced that the album's release date would be pushed back to 13 October, and in September's place, an EP was released, entitled Hypnagogic States, containing remixes of the four singles from 4:13 Dream. On 21 August the title of the album was announced online as 4.13 Dream, corrected three days later to 4:13 Dream. The official track listing was first revealed on the band's official website on 15 September. Smith also mentioned the "dark album" companion piece, and jokingly stated that he would like to have it released by his next birthday (21 April 2009). On 11 October, The Cure performed 4:13 Dream in its entirety at a free performance in the Piazza San Giovanni in Rome that was recorded for the MTV Live concert series. The album's release date was delayed yet again, and was ultimately released on 27 October.

At least twenty-six additional songs were recorded for the album that did not make the final cut. Smith originally intended the 2008 album to be a double album but due to various problems only thirteen songs were released, on a single disc. Smith has said, "Compiling a single CD album required a different approach (for one thing there was no longer the time to 'spread out' and connect the different moods as I had originally intended) and as a consequence a number of (my favorite!) slower songs and instrumental pieces were left unfinished and unreleased." Four outtakes from the album were issued in 2008 as B-sides: "NY Trip", "All Kinds of Stuff", "Down Under" and "Without You".

In April 2014, Smith announced that the band would release an album called 4:14 Scream later that year, which would contain fourteen of the outtakes from the 2007 recording sessions. As well, a limited edition double album titled 4:26 Dream was also mooted, which would contain all twenty-six non-album songs. To date, these albums of outtakes remain unreleased.

4:13 Dream a score of 69 out of 100 from Metacritic based on "generally favorable reviews". While most critics have praised the album as a quintessential Cure record, others have criticised the album's production and its overly comfortable and lightweight songwriting.

All tracks written by The Cure.

The Cure - Us or Them. Source : iparoles.fr