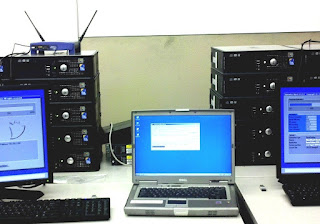 Ghost (an acronym for general hardware-oriented system transfer) is a disk cloning and backup tool originally developed by Murray Haszard in 1995 for Binary Research. The technology was acquired in 1998 by Symantec.

The backup and recovery functionality has been replaced by Symantec System Recovery (SSR), although the Ghost imaging technology is still actively developed and is available as part of Symantec Ghost Solution Suite.

Binary Research developed Ghost in Auckland, New Zealand. After the Symantec acquisition, a few functions (such as translation into other languages) were moved elsewhere, but the main development remained in Auckland until October 2009 at which time much was moved to India.

Technologies developed by 20/20 Software were integrated into Ghost after their acquisition by Symantec in April 2000.

At the end of 2003, Symantec acquired its largest competitor in the disk-cloning field, PowerQuest. On August 2, 2004, Norton Ghost 9.0 was released as a new consumer version of Ghost, which is based on PowerQuestâ€²s Drive Image version 7, and provides Live imaging of a Windows system. Ghost 9 continues to leverage the PowerQuest file format, meaning it is not backward compatible with previous versions of Ghost. However, a version of Ghost 8.0 is included on the Ghost 9 recovery disk to support existing Ghost customers.

The first versions of Ghost supports only the cloning of entire disks. However, version 3.1, released in 1997 supports cloning individual partitions. Ghost could clone a disk or partition to another disk or partition or to an image file. Ghost allows for writing a clone or image to a second disk in the same machine, another machine linked by a parallel or network cable, a network drive, or to a tape drive.

Version 4.0 of Ghost added multicast technology, following the lead of a competitor, ImageCast. Multicasting supports sending a single backup image simultaneously to other machines without putting greater stress on the network than by sending an image to a single machine. This version also introduced Ghost Explorer, a Windows program which supports browsing the contents of an image file and extract individual files from it. Explorer was subsequently enhanced to support to adding and deleting files in an image with FAT, and later with ext2, ext3 and NTFS file systems. Until 2007, Ghost Explorer could not edit NTFS images. Ghost Explorer could work with images from older versions but only slowly; version 4 images contain indexes to find files rapidly. Version 4.0 also moved from real-mode DOS to 286 protected mode. The additional memory available allows Ghost to provide several levels of compression for images, and to provide the file browser. In 1998, Ghost 4.1 supports password-protected images.

Version 5.0 moved to 386 protected mode. Unlike the text-based user interface of earlier versions, 5.0 uses a graphical user interface (GUI). The Binary Research logo, two stars revolving around each other, plays on the main screen when the program is idle. In 1998, Gdisk, a script-based partition manager, was integrated in Ghost. Gdisk serves a role similar to Fdisk, but has greater capabilities.

A Norton Ghost version for Novell NetWare (called 2.0), released around 1999, supports NSS partitions (although it runs in DOS, like the others).

Ghost 6.0, released in 2000, includes a management console for managing large numbers of machines. The console communicates with client software on managed computers and allows a system administrator to refresh the disk of a machine remotely.

As a DOS-based program, Ghost requires machines running Windows to reboot to DOS to run it. Ghost 6.0 requires a separate DOS partition when used with the console.

Released December 14, 2001, Ghost 7.5 creates a virtual partition, a DOS partition which actually exists as a file within a normal Windows file system. This significantly eased systems management because the user no longer had to set up their own partition tables. Ghost 7.5 can write images to CD-R discs. Later versions can write DVDs.

Ghost 8.0 can run directly from Windows. It is well-suited for placement on bootable media, such as BartPEâ€²s bootable CD. The corporate edition supports unicast, multicast and peer-to-peer transfers via TCP/IP. Ghost 8.0 supports NTFS file system, although NTFS is not accessible from a DOS program.

The off-line version of Ghost, which runs from bootable media in place of the installed operating system, originally faced a number of driver support difficulties due to limitations of the increasingly obsolete 16-bit DOS environment. Driver selection and configuration within DOS was non-trivial from the beginning, and the limited space available on floppy disks made disk cloning of several different disk controllers a difficult task, where different SCSI, USB, and CD-ROM drives were involved. Mouse support was possible but often left out due to the limited space for drivers on a floppy disk. Some devices such as USB often did not work using newer features such as USB 2.0, instead only operating at 1.0 speeds and taking hours to do what should have taken only a few minutes. As widespread support for DOS went into decline, it became increasingly difficult to get hardware drivers for DOS for the newer hardware.

Disk imaging competitors to Ghost have dealt with the decline of DOS by moving to other recovery environments such as FreeBSD, Linux or Windows PE, where they can draw on current driver development to be able to image newer models of disk controllers. Nevertheless, the DOS version of Ghost on compatible hardware configurations works much faster than most of the *nix based image and backup tools.

Ghost 8 and later are Windows programs; as such, they can run on Windows PE, BartPE or Hiren's BootCD and use the same plug and play hardware drivers as a standard desktop computer, making hardware support for Ghost much simpler.

Norton Ghost 2003, a consumer edition of Ghost, was released on September 6, 2002. Available as an independent product, Norton Ghost 2003 was also included as a component of Norton SystemWorks 2003 Professional. A simpler, non-corporate version of Ghost, Norton Ghost 2003 does not include the console but has a Windows front-end to script Ghost operations and create a bootable Ghost diskette. The machine still needs to reboot to the virtual partition, but the user does not need to interact with DOS. Symantec deprecated LiveUpdate support for Norton Ghost 2003 in early 2006.

Released November 15, 2004, Symantec renamed the Enterprise version of Ghost to Symantec Ghost Solution Suite 1.0. This helped clarify the difference between the consumer and business editions of the product. This was further defined in February 2006, with the release of Norton Save And Restore (also known as Norton Backup And Restore), a standalone backup application based on Ghost 10.0.

Ghost Solution Suite 1.1 is a bundle of an updated version of Ghost, Symantec Client Migration (a user data and settings migration tool) and the former PowerQuest equivalent, DeployCenter (using PQI images). Ghost Solution Suite 1.1 was released on December 2005. It can create an image file that is larger than 2 GB. (In Ghost 8.2 or earlier, such image files are automatically split into two or more segments, so that each segment has a maximum size of 2 GB.) Other new features include more comprehensive manufacturing tools, and the ability to create a "universal boot disk".

Ghost 9.0 was released August 2, 2004. It represents a significant shift in the consumer product line from Ghost 2003, in several ways:

Since Ghost 9 does not support the older .gho format disk images, a separate CD containing Ghost 2003 is included in the retail packaging for users needing to access those older images.

The limitations of Ghost 9 compared to Ghost 2003 were not well-communicated by Symantec, and resulted in many dissatisfied customers who purchased Ghost 9 expecting the previous versionâ€²s features (like making images from the bootable Ghost environment, no installation required, and no product activation).

Norton Save And Restore 1.0, released in February 2006, was the renamed consumer version of Ghost. It used Ghost 10.0â€²s engine, with the addition of features to allow backup and restoration of individual files.

Ghost Solution Suite 2.0 was released in November 2006. This version provides significant improvements in performance, as well as the ability to edit NTFS images. This version also adds support for Windows Vista, x64 versions of Windows, and GUID Partition Table (GPT) disks. However, the software does not fully support systems with Extensible Firmware Interface (EFI) firmware.

Version 14.0 uses Volume Snapshot Service (VSS) to make backups and can store backups to an FTP site. Ghost can connect to ThreatCon, a Symantec service that monitors malware activity around the world, and performs incremental backups when a specific threat level is reached. Other features include the ability to back up to network-attached storage devices and support for NTFS partitions up to 16TB. Ghost can manage other installations of version 12.0 or later across a network.

The ghost software for enterprise, including Ghost 11.5, was released in May 2008. New features include:

According to the Norton community on Symantecâ€²s site, the following features are available in Ghost 15:

The ghost software for enterprise, including Ghost 12.0 and Deployment Solution 6.9, was announced in March 2015.

The ghost software for enterprise, including Ghost 12.0 and Deployment Solution 6.9, was released in 7 March 2016.

The ghost software for enterprise, including Ghost 12.0 and Deployment Solution 6.9, was released in 18 May 2017. Release Update 3, which was released 22 September 2017, added support for the ext4 filesystem.

Ghost is marketed as a backup program. Its recovery environment comes in an ISO image file that needs to be written to a CD or other physical media, if it is to be used on a physical machine. This provides an environment to perform offline system recovery or backup. Ghost can mount a backup volume to recover individual files.

Ghost can copy the contents of one volume to another or convert a volume contents to a virtual disk in VMDK or VHD format.

Initially, Ghost supported only FAT file system, although it could copy (but not resize) other file systems by performing a sector-by-sector transfer. Ghost added support for NTFS later in 1996, and also provided a program, Ghostwalker, to change the Security ID (SID) that made Windows NT systems distinguishable from each other. Ghostwalker is capable of modifying the name of the Windows NT computer from its own interface. Ghost added support for the ext2 file system in 1999 and for ext3 subsequently. Support for ext4 was added in September 2017.

Norton Ghost was discontinued on April 30, 2013. Support via chat and knowledge base was available until June 30, 2014. Until it was removed, the Symantec Ghost Web page invited Ghost customers to try Symantec System Recovery, described as software for backup and disaster recovery.

The current version of the enterprise software, the Symantec Ghost Solution Suite 3.2, which includes Ghost 12.0, is updated available at 2016 http://buy.symantec.com/estore/clp/productdetails/pk/ghost-solution-suite