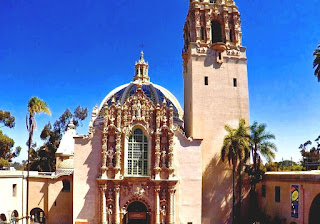 The San Diego Museum of Man is a museum of anthropology located in Balboa Park, San Diego, California and housed in the historic landmark buildings of the California Quadrangle.

The museum traces its origins to the Panama-California Exposition, which opened in 1915 on the occasion of the inauguration of the Panama Canal. The central exhibit of the exposition, "The Story of Man through the Ages", was assembled under the direction of noted archaeologist Dr. Edgar Lee Hewett of the School of American Archaeology (later renamed the School of American Research, and since 2007 the School for Advanced Research). Hewett organized expeditions to gather pre-Columbian pottery from the American Southwest and to Guatemala for objects and reproductions of Maya civilization monuments.

Numerous other materials were gathered from expeditions sent by anthropologist AleÅ¡ HrdliÄka of the Smithsonian Institution, who gathered casts and specimens from Africa, Siberia, Alaska and Southeast Asia. Osteological remains and trepanated crania from Peruvian sites were also obtained.

As the Exposition drew to a close, a group of citizens led by George Marston formed the San Diego Museum Association to retain the collection and convert it into a permanent museum, with Dr. Hewett as the first director. Notable additions to the museumâ€™s collection after the Exposition included the Jessop Weapons Collection and a rare collection of artifacts from the ancient Egyptian city of Amarna, donated by Ellen Browning Scripps and the Egyptian Exploration Society.

Between 1935 and 1936, the museumâ€™s name briefly changed to the Palace of Science in order to correspond with other exhibit buildings participating in the California-Pacific International Exposition. During this exposition, the museum housed several special exhibitions from a variety of sources, such as the Monte Alban exhibit, which featured many artifacts on loan from the Mexican government.

The name was changed to "Museum of Man" in 1942 to emphasize the museum's concentration on anthropology. "San Diego" was added in 1978. The museum was converted into a hospital during World War II, and its exhibits and collections were temporarily moved into storage. Following the war, the museum began to focus its collections on the peoples of the Western Americas. The museumâ€™s collections grew substantially from the 1980s through the early 1990s, and today contains nearly two million individual objects.

The museum is housed in four original buildings from the 1915 Exposition. Those include the California Quadrangle, which was designed for the Exposition by American architect Bertram G. Goodhue, and the California Tower, one of the most prominent landmarks in San Diego. The Quadrangle and Tower are listed on the National Register of Historic Places. The exterior sculpture on the building was created by the Piccirilli Brothers.

The main museum, including exhibits and gift shop, is housed in the ornate California Building with its landmark tower. The tower, closed to the public for nearly 80 years, reopened on January 1, 2015, in time for the 2015 centennial of the Panama-California Exposition. The tower contains a carillon and quarterly-hour chimes which can be heard all over Balboa Park.

The museum also occupies three other original 1915 buildings. Administrative offices and an auditorium are housed in the Gill Administration Building, immediately adjacent to the Museum on the west. Originally known as the Balboa Park Administration Building, it was built in 1911 and designed by architect Irving Gill. It was the first building erected in Balboa Park. On the opposite (south) side of the California Quadrangle, housed in what was originally the Fine Arts Building, is Evernham Hall, a banquet room which is also used for temporary exhibits. Immediately adjacent is the Saint Francis Chapel, a non-denominational Spanish-style chapel available for private events such as weddings.

The museum's collections and permanent exhibits focus on the pre-Columbian history of the western Americas, with materials drawn from Native American cultures of the Southern California region, and Mesoamerican civilizations such as the Maya. The museum also holds one of the most important collections of Ancient Egyptian antiquities in the United States, which includes authentic mummies, burial masks, figurines, and seven painted wooden coffins. The most extraordinary of these is an extremely rare Ptolemaic child's coffin â€" only six others are known to exist worldwide. Total holdings include more than 100,000 documented ethnographic items, more than 30,000 books and journals, and 25,000 photographic images.

BEERology: This special exhibit features 10,000 years of beer history and brewing practices among the Ancient Egyptians, Sumerians, Chinese, Amazonian headhunters, and other cultures throughout the world. The exhibit explores ancient and modern beer types and brewing practices, as well as their influential connections to agriculture, religion, and social meaning-making.

Highlights include the solid gold beer cup of an Incan king (1250 to 1533 A.D.); Peruvian Moche pots, the ancient equivalent to modern day beer growlers; a modern homebrew equipment set; and a short documentary on the San Diego craft beer industry and tradition.

The exhibit also includes a full, hand-crafted bar, which provides the space for regular beer tasting events and other private functions. This exhibit will be open through summer 2016.

Maya: Heart of Sky, Heart of Earth: displays several huge Maya monuments, or stelae, in the Rotunda Gallery. These are casts of the original monuments in Quirigua, a site in Guatemala. The casts were made for the 1915 Panama-California Exposition and have been on display ever since, except during World War II, when the Navy took control of most of Balboa Park and turned the Museum into a hospital. Today these casts are studied by researchers tracing the history of the Maya through their hieroglyphic writing, because the casts are in better condition than the original monuments, which have suffered some weathering and erosion since the casts were made. The exhibition also includes archaeological discoveries highlighting the creativity and beliefs of the ancient Maya: masks, bowls, figurines, etc.

Monsters! is kid-friendly special exhibit that blends interactive activities with displays of folk art and other artifacts to tell the stories of more than 50 different monsters and mythical creatures from around the world. Visitors explore the exhibit through the perspective of two children who discover the origins and mythology behind creatures that have captivated world-audiences throughout time.

As visitors learn about creatures such as dragons, the yeti, the kraken, unicorns, and bogeyman, they move through various thematic areas, such as a childâ€™s bedroom, a forest, a cave and the ocean, which represent various monstersâ€™ habitats.

Interactive activities include a book nook for reading monster story books, a magnetic monster wall where kids can create their own monsters, and a puppet theater where kids can act out monster origin stories. This exhibit will be open through 2016.

Race: Are We So Different?: This exhibit explores the social and historical origins of race, and how most of what we think about race is based on myth, folklore, or assumptions unsupported by genetics or biology. It explains the origins of race and racism, and helps us understand how to deal with them in productive and enlightening ways. Visitors explore these ideas with hands-on interactive activities, videos, and more.

Footsteps Through Time: This exhibit displays Bone Clones replicas of skulls and reconstructions of early hominids, arranged to show the timeline of human evolution. The reconstructions include Lucy, the Taung Child, Zinj, Mrs. Ples, and a replica of a Neanderthal skeleton based on the La Chapelle-aux-Saints Old Man. A small reconstruction of a cave allows visitors to walk into the habitat of Cro-Magnon man, and view the bones of their kills and replicas of their cave paintings. The Primate Hall and Human Lab are also a part of the exhibit.

Kumeyaay: Native Californians: This exhibit explores traditional Kumeyaay lifeways, featuring the art of pottery and basket making, food procurement, dress and adornment, traditional medicine, games, and ceremonies. Artifacts and photographs from the museum's collection highlight the rich cultural heritage of the Kumeyaay, offering a glimpse of the life of the ancestors of today's present day people.

Artifacts include the authentic remains of two Egyptian mummies, painted mummy coffins and masks, amulets, pottery, and ushabti â€" all of which date primarily from the Late Period and from the Ptolemaic Dynasty. The exhibit also includes a rare child sarcophagus (305-30 B.C.E.), one of seven known to exist in all museum collections around the world.

In addition to its Ancient Egyptian artifacts, the exhibit also includes shrunken heads from the Amazon, Peruvian child mummies, and the remains of the Lemon Grove mummy, discovered in a garage in the nearby namesake suburb.

Adventure Kids in Egypt: This family-oriented exhibit gives younger visitors an opportunity for interactive, sensory learning about ancient Egyptian civilization, and about the role of anthropologists and archaeologists in the research and interpretation of the culture. Highlights include an interactive computer game that test skills in archaeology and exploration, an archaeological dig box with artifacts to uncover, a child-sized sarcophagus puzzle, and costumes based on ancient Egyptian garb for children to wear.

Cannibals: Myth & Reality: This special exhibit opened in March 2016. Exhibits explore what makes a person a cannibal; how cannibals have been portrayed in popular culture; famous incidents where people resorted to cannibalism to survive; how the human body has been used as medicine; and why some cultures have been falsely labeled as "cannibal".

"Tower After Hours" events are held three to five times a year and focus on the heritage and culture of a particular cultural community in San Diego. They are held in the museum's rotunda and feature music, dance, food and other aspects of the culture in focus.

The California Building and its tower were used by Orson Welles as the principal features of the fictitious Xanadu estate in the classic film Citizen Kane.