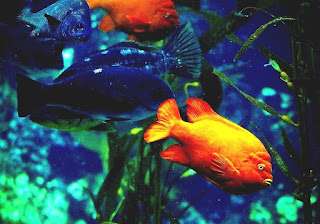 Birch Aquarium at Scripps (sometimes referred to as Scripps Aquarium or Birch Aquarium) is the public outreach center for Scripps Institution of Oceanography at the University of California, San Diego. Accredited by the Association of Zoos and Aquariums, Birch Aquarium at Scripps has an annual attendance of more than 439,000, including more than 40,000 school children, and features more than 3,000 animals representing 380 species. The hilltop site provides views of the Scripps Institution of Oceanography campus and the Pacific Ocean.

The aquarium was established in 1903 after the Marine Biological Association of San Diego was created to conduct marine research in the local waters of the Pacific Ocean. (Its name was later changed to Scripps Institution of Oceanography to honor supporters Ellen Browning Scripps and E.W. Scripps, part of the Scripps family of newspaper pioneers.) The founders built and maintained a small public aquarium and museum to communicate their discoveries to the world.

The researchers outgrew their modest laboratory in the boathouse of the Hotel del Coronado and moved to a small laboratory at La Jolla Cove in 1905. Several years later, the association purchased 174 acres (70Â ha) at La Jolla Shores for $1,000 at a public auction from the city of San Diego. The first permanent building at the new site was constructed in 1910. Today the Old Scripps Building is listed on the National Register of Historic Places.

In 1915, the first building devoted solely to an aquarium was built on the Scripps campus. The small, wooden structure contained 19 tanks ranging in size from 96 to 228 U.S. gallons (360 to 860Â l). The oceanographic museum was located in a nearby building. The institution's name changed to Scripps Institution of Oceanography in 1925 to recognize the growing faculty's widened range of studies.

The Scripps Aquarium-Museum opened in 1951 and named to honor former institution director T. Wayland Vaughan. The three-story facility served the institution for more than 40 years. A ring of 18 tanks, the largest at 2,000 U.S. gallons (7,600Â l), surrounded a central museum of glass exhibit cases displaying Scripps research projects. Within a month of its opening, visitors from all 48 states had signed the guest book.

In 1985, the Stephen and Mary Birch Foundation started a fund-raising effort for a new aquarium by donating $6 million. JCJ Architecture of San Diego was selected as the design architect and in 1992, the current $14 million Birch Aquarium at Scripps opened its doors. UC San Diego donated the land. Birch Aquarium at Scripps celebrated its 20th anniversary in September 2012 by introducing a new visual identity.

Hall of Fishes features more than 60 tanks of Pacific fishes and invertebrates. The path along the Hall of Fishes follows the currents of the North Pacific Gyre, starting with tanks inspired by the Pacific Northwest, then tanks with organisms from California, followed by tanks with organisms from Mexico and Baja California, ending with tanks inspired by the Indo-Pacific. The largest habitat is a 70,000-U.S.-gallon (260,000Â l) kelp forest tank. The tank can be viewed live online through the Kelp Cam.

Just past the Boundless Energy courtyard, is ElasmoBeach. ElasmoBeach is a sandy bottomed outside tank based on the sea floor of La Jolla. This tank features various sharks and rays, including leopard sharks and pacific angelsharks.

There's Something About Seahorses

There's Something About Seahorses features more than a dozen seahorse species and their relatives, a special seahorse nursery, and hands-on activities for all ages about seahorse biology. Birch Aquarium at Scripps is a world leader in seahorse propagation, reducing the need for other zoos and aquariums to collect from the wild.

Feeling the Heat: The Climate Challenge

This exhibit presents the science of global warming and highlights Scripps Institution of Oceanography's half-century of research on climate change. Through interactive activities, the exhibit shows visitors current environmental changes and those projected for the future. It also presents the latest ideas for reducing carbon emissions. In Fall 2007, the exhibit was named the Silver winner in museum design for the 2007 Event Design Awards sponsored by Connecticut-based Event Design Magazine.

This is an outdoor playground that celebrates the innovative ways we can use natural forces to power our lives. Interactive stations explore ways to harness renewable energy from the sun, the wind, and ocean motion. Visitors can expend their own "boundless energy" at a play area for kids in which stationary bikes, hand cranks, and a seesaw powers a whimsical water sculpture.

Birch Aquarium at Scripps offers dozens of educational programs for all ages about the ocean, Earth and atmosphere.