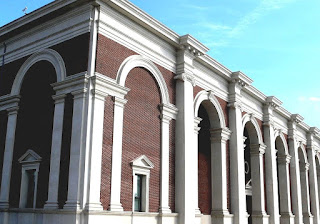 The Meadows Museum also known as the "Prado on the Prairie" is a museum in Dallas, Texas. A division of the Southern Methodist University Meadows School of the Arts, houses one of the largest and most comprehensive collections of Spanish art outside of Spain, with works dating from the 10th to the 20th century. It includes masterpieces by some of the world's greatest painters: El Greco, VelÃ¡zquez, Ribera, Murillo, Goya, MirÃ³, Sorolla, and Picasso. Highlights of the Meadows Collection include Renaissance altarpieces, monumental Baroque canvases, rococo oil sketches, polychrome wood sculptures, Impressionist landscapes, modernist abstractions, a comprehensive collection of the graphic works of Goya, and a select group of sculptures by major twentieth-century masters â€" Rodin, Maillol, Giacometti, Moore, Smith, and Oldenburg. The University Art Collection, also administered by the museum, includes works by leading artists of the region â€" Frank Reaugh, Jerry Bywaters, Otis Dozier, Alexandre Hogue, and William Lester.

In 1965, the Meadows Museum opened its doors to the public for the first time. The museum's collection of Spanish art and the galleries for its display were a gift to Southern Methodist University from Algur Hurtle Meadows, a Dallas businessman and founder of the General American Oil Company of Texas. During the 1950s business took Meadows frequently to Madrid, where repeated visits to the Prado Museum inspired what would become a lasting interest in the art of Spain's Golden Age. By 1962, Meadows had amassed his own collection of Spanish paintings, which became the foundation of the Museum's collection. After the opening of the museum raised doubts about the quality of some of these works, SMU appointed the museum's first professional director, Dr. William B. Jordan, who served in that capacity from 1967 until 1981. Supported by Meadows until his death in 1978, the museum initiated a vigorous new phase of collecting, during which the core of the present collection was formed.

Since 1978, the museum's efforts to develop and care for the collection have continued with the support of The Meadows Foundation, a general purpose philanthropic institution created and incorporated by Algur Meadows in 1948. This fruitful partnership has resulted in a comprehensive campaign of conservation, the support of scholarly research of the collection, and a number of important acquisitions, particularly in the areas of medieval, Baroque, and 20th-century art.

A 2013 exhibition titled Sorolla & America features paintings by the Spanish impressionist Joaquin Sorolla. The Meadows was key in developing this new show, exploring for the first time Sorollaâ€™s unique relationship with the United States in the early twentieth century. It began at the Meadows (13 December 2013 â€" 19 April 2014), then traveled to the San Diego Museum of Art (30 May â€" 26 August 2014) and FundaciÃ³n MAPFRE in Madrid (23 September 2014 â€" 11 January 2015).