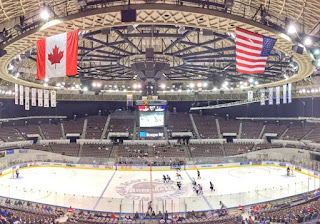 Norfolk Scope is a multi-function complex in Norfolk, Virginia comprising an 11,000-person arena, a 2,500-person theater known as Chrysler Hall, a 10,000 square foot-exhibition hall and a 600-car parking garage.

The arena was designed by Italian architect/engineer Pier Luigi Nervi in conjunction with the (now defunct) local firm Williams and Tazewell, which designed the entire complex. Nervi's design for the arena's reinforced concrete dome derived from the PalaLottomatica and the much smaller Palazzetto dello Sport, which were built in the 1950s for the 1960 Summer Olympics in Rome.

Construction on Scope began in June 1968 at the northern perimeter of Norfolk's downtown and was completed in 1971 at a cost of $35 million. Federal funds covered $23 million of the cost, and when it opened formally on November 12, 1971, the structure was the second-largest public complex in Virginia, behind only the Pentagon.

The name "Scope", a contraction of kaleidoscope, emphasizes the venue's re-configurability. The facility logo (right), which features a multi-colored, abstracted kaleidoscope image, was designed by Raymond Loewy's firm Loewy/Snaith of New York.

After watching the 1960 Rome Summer Olympics on television, and seeing the Palazzo and Palazzetto dello Sport, Brad Tazewell and Jim Williams, two Norfolk architects, solicited U.S. Sen. A. Willis Robertson, father of Pat Robertson, to build a sports complex in Norfolk. Subsequently, President Lyndon B. Johnson asked Robertson to support federal funding for a multimillion-dollar cultural center in Colorado and Robertson said he would if Johnson would support one in Norfolk. Williams and Tazewell was subsequently commissioned; they in turn commissioned Nervi.

The complex was an important part of the first phase of Norfolk's post-World War II revitalization. A large section of the city's downtown was razed, and the Scope complex was to "anchor" its northern corner, with the Vincent Kling designed Courthouse and Civic complex anchoring the Eastern edge of downtown.

The arena is located on its 14-acre site above a raised plinth, below which is located a parking garage for 640 cars. The facility includes a 65,000Â sqÂ ft (6,000Â m2) exhibit hall as well as the adjacent Chrysler Hall, a music and theater venue, home to the Virginia Symphony Orchestra). The arena's seating can be reconfigured to accommodate from 10,253 for sporting events up to 13,800 for concerts.

With a concrete monolithic dome measuring 440Â ft (134 m) in diameter and a height of 110Â ft (33.5 m), the dome was, at the time of its construction, the largest of its kind in the world â€" and was displaced as the record holder after the construction of the Seattle Kingdome. After the demolition of the larger Kingdome in 2000, Scope reclaimed the title as having the world's largest reinforced thin-shell concrete dome. Supported by 24 flying buttresses, the arena roof encloses 85,000Â sqÂ ft (7,900Â m2). With over 1,000 pilings, the facility was constructed 10' below the city's water table. The roof is a ribbed concrete dome, independent of seating bowl formed of sloped concrete beams supporting precast treads and risers which form the seating bowl. The perimeter of the dome roof is supported by a combination of vertical columns and inclined buttresses, which tie into a tension ring below ground. A concentric ring, approximately 7' 9" wide, is suspended from the dome, for service and lighting needs.

During preparations for the first hosting of the Ringling Bros. and Barnum & Bailey Circus, a bear escaped its cage and ran across the wet paint on the floor of the unfinished Exhibition Hall below. During the first presentation in the Exhibition Hall of the Hampton Roads Automobile Show, visitors could spot bear tracks in the painted floor, between the exhibitions. (Source: The Virginian-Pilot)

The arena has undergone $11 million of renovations since 2003, including the replacement of a center-hung scoreboard with a matrix screen on each side with a center-hung scoreboard with LED video and matrix boards and two LED end-zone videoboards in 2008. A new glass wall has been installed, and is expected to be extended in order to expand the arena's main concourse at a cost of $3.5 million in 2014. This would result in additional restrooms and concession stands at the arena.

There has been discussion about expanding the Norfolk Scope, by adding 5,000 seats and 24 luxury suites, in the near future, in order to remain competitive with neighboring venues in the southeastern and mid-Atlantic states.