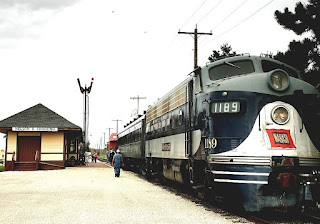 The Monticello Railway Museum (initialized MRYM, reporting mark MRMZ) is a non-profit railroad museum located in Monticello, Illinois, about 18 miles west of Champaign, IL. It is home to over 100 pieces of railroad equipment, including several restored diesel locomotives and cars.

The museum offers a tourist railroad which operates excursion trains over a former railroad line that was owned by Illinois Terminal and Illinois Central Gulf. For a donation, guests can operate one of the locomotives during the "Throttle Time" program. Trains run May through October and on holidays. Visit the museums website for the latest information.

The Monticello Railway Museum is located off Interstate 72 at Market St. Exit 166. Turn at the stoplight onto Iron Horse Place at the Best Western Gateway Inn, and follow the frontage road to the end. 25 minutes from Champaign and Decatur. 50 minutes from Bloomington.

The Monticello Railway Museum, a not-for-profit educational organization, was founded in 1966 as "SPUR, Inc" (Society for the Perpetuation of Unretired Railfans, Inc). Its original goal was to encourage the Chicago, Burlington & Quincy Railroad to continue operating its steam-powered railfan excurions. When that effort failed, the organization decided to operate its own steam-powered excursions and began a search for equipment and a suitable location. SPUR contacted the Illinois Central Railroad about operating on the West end of ICRR's lightly used Rantoul District between LeRoy and Sabina, Illinois. For such an operation, ICRR would require SPUR's equipment to be in "ICC condition" and use the railroad's union train crews. SPUR concluded this would be prohibitively expensive for the organization and continued its search. In 1966, SPUR was invited to Monticello, Illinois by a member of the Illinois Pioneer Heritage Center and moved its first piece of equipment, locomotive #1, a 1925 Alco 0-4-0T, to a vacant lot near the Heritage Center in Monticello. The organization's name was changed in 1970 to the Monticello & Sangamon Valley Railway Historical Society, Inc., and then shortened in 1982 to the present day Monticello Railway Museum.

The first land purchased was about five miles (8Â km) of former Illinois Terminal interurban right of way between Monticello and White Heath. This right of way had been abandoned a few years before and the grade had only ballast in place. A former popcorn field was purchased for a railroad yard and maintenance area. The volunteers prepared the yard area for the arrival of locomotive #1 and moved it from the Heritage Center's lot in Monticello. Through the years track was laid on the former Illinois Terminal interurban grade toward White Heath until approximately 2Â½ miles was completed. A run-around was constructed at (Blacker's), about 2 miles from White Heath. No further construction took place on the former interurban grade and Blacker's became the North end of the line. In 1988, after the purchase of some of the adjacent Illinois Central Gulf's Decatur District, the portion of the Museum's trackage built on the former Illinois Terminal interurban grade was designated the "Terminal Division."

In 1987, the Museum purchased 7 Â½ miles of Illinois Central Gulf Decatur District trackage between Monticello and White Heath which parallels the Illinois Terminal right-of-way. The Nelson Crossing display track lead was extended to a new connecting turnout in the former ICG trackage, joining the Museum's track with the newly purchased line. The connection was built by Museum volunteers in just two weekends. After a short "Golden Spike" ceremony, the Museum's first run into Monticello was made. The former Illinois Central Gulf trackage to Monticello and White Heath was designated the Museum's "Central Division."

Nelson's Crossing Depot was donated in 1977. This Illinois Central Railroad depot was formerly located in Deland, Illinois. The depot was built in 1919 and rebuilt in 1942. The depot was moved to the museum in 1980 and is the ticket office and gift shop of the museum.

The Wabash Depot was built in 1899 to replace a smaller depot, burned earlier that year. At the time the Wabash mainline went through Monticello between what is now the grain elevator and McDonald's. The line was moved west onto a fill, straightened, and a new steel bridge was built over what was the Illinois Central Railroad (now Monticello Railway Museum trackage). On April 20, 1904, the depot was moved to higher ground beside the new mainline. The depot was moved to its present location on May 29, 1987, and was restored by the Monticello Depot Association. January 1. 1993, that organization, its members and assets were absorbed into the Monticello Railway Museum.

Among the special events at the museum, there is Railroad Days held each year the third weekend of September. One ticket per day allows riders to experience the ultimate railroad experience in the Midwest. A regular passenger train using former Illinois Central coaches and office car #7, a mixed-freight train, plus motor cars going into White Heath.

A fireworks special train leaves at 8.00pm and travels north to the museum grounds to set and watch fireworks. Air conditioned coaches and open air car, and open window coaches along with two locomotives are used.