The Museum (band) - The Museum 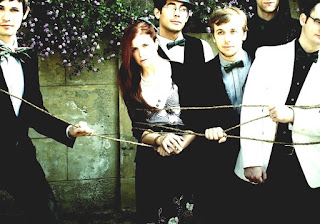 In 2006, Ben Richter moved from Texas to Atlanta, Georgia to take a job at a local church as a youth pastor and worship leader. He invited his friend Geoffrey Ashcraft to move with him. Upon their arrival at the new church they were introduced to Josh Kirk. Josh was working in the maintenance department for the church as he worked his way through aviation school. The three began leading worship together for local youth services and eventually began writing songs together. While traveling in Romania, drummer Josh Kirk visited a museum dedicated to the Romanian Revolution of 1989. There he heard the story of how a small group of Christians sparked a revolution that led to the downfall of communism in their country. The band was inspired by this story and subsequently took the name "The Museum".

Richter signed with BEC Recordings in late 2009. The band went into the studio to record their debut album, Let Love Win, which released mid-2010.

In 2011 the band partnered with Not for Sale Campaign in the fight to bring an end to human trafficking. On their website, the band offered a free download of a song written for the cause called "Not for Sale". They encouraged supporters to donate to the campaign when downloading the song, and they began selling a limited-edition T-shirt with the proceeds going to the campaign. The partnership led to the "Not For Sale Freedom Tour" headlined by The Museum. Throughout 2011, the band raised more that $10,000 for Not for Sale Campaign.

Ben Richter, Josh Kirk and Geoff Ashcraft started the band in 2008 and were joined by bassist Chris Brink in 2009.

In 2011 Geoff Ashcraft moved back to Texas and joined the Dallas-based band, Sleeperstar. Josh and Ben led forward along with bassist Chris Brink. Leading into early 2013 Chris Brink came off the road full-time after nearly four years with the band. Chris left to stay home with his wife and newborn child and serve at their local church, Passion City Church in Atlanta.

Ben has been the driving force and leader of the band, while Josh Kirk is still involved through songwriting and touring part-time.