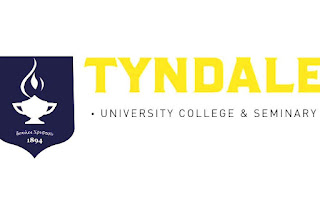 Tyndale University College and Seminary is a Canadian accredited Christian institution of higher education in the Protestant Evangelical tradition located in Toronto, Ontario. Tyndale students come from over 40 different Christian denominations and more than 30 different ethnic groups. Tyndale offers undergraduate and graduate programs. A student residence is located on its campus. Tyndale has a BED (After-Degree) program leading to certification in the Province of Ontario.

Campus Virtual Tour - Welcome to Tyndale! Let Kayla give you a tour of the campus.

The Toronto Bible Training School was founded in 1894 by a group of brethren under the supervision of Elmore Harris pastor of Walmer Road Baptist Church. Elmore Harris became the first President. William Boyd Stewart (former pastor of Bond Street Baptist Church) was the first Principal. Courses were held at the Walmer Road Church for the first four years until they relocated to new facilities the Gothic Revival building at 110 College Street (demolished after 1928 and now site of the University of Toronto's Banting and Best Department of Medical Research Building since 1930) in 1898 financed chiefly through generous contributions of the Harris family. (This land had been leased from the University of Toronto). The name of the school was changed to Toronto Bible College in 1912 and in September 1928 relocated to 16 Spadina Road (just north of Bloor Street and now Native Canadian Centre) when the lease expired. It became the first permanent Canadian Bible school and only the third in North America. The founders' vision of TBC was to train laypeople as "Sunday School teachers, Pastors' Assistants, and as City, Home and Foreign Missionaries." The institution's leadership was largely Baptist and Presbyterian, but also included Methodists and Anglicans. The TBC graduation service was always a significant Toronto event, held initially at Massey Hall, and then moved to the University of Toronto's Varsity Stadium to accommodate crowds as large as 6,000.

In the 1940s, the school's president, John McNicol, steered a path between modernism and ultra-fundamentalism (specifically dispensationalism)--both of which McNicol denounced as threats to the health of the church. This unique position gained TBC the support of evangelicals in a variety of mainline denominations.

In 1968, Toronto Bible College merged with the London College of Bible and Missions from London, Ontario. LCBM began in 1935 as the London Bible Institute, led by J. Wilmot Mahood. The newly merged institution was named Ontario Bible College (OBC). This merger brought more students to the Toronto-based institution from other evangelical denominations including the Associated Gospel Churches, the Brethren, and the Mennonite Brethren. In 1976 OBC relocated to a former Jesuit seminary (Regis College) in Willowdale, Toronto (formerly City of North York), designed by modernist architect Peter Dickinson. In the same year, the institution also established a graduate school named Ontario Theological Seminary (OTS). OBC/OTS was given degree-granting powers by the Government of Ontario in 1986, and received full accreditation by the Association of Theological Schools in 1989.

By 1995, the institution had become insolvent and filed to make a proposal to creditors under the Bankruptcy and Insolvency Act in Canada. A new president, Brian Stiller, and CFO, Winston Ling, were brought on and a new board was chosen. In 1998 the school was renamed Tyndale College and Seminary after William Tyndale, a Reformation theologian of the sixteenth century. The leadership intended the name change to indicate their vision to build "a world-class centre of Christian higher education in Canada."

In 2003, the Ontario Legislature authorized Tyndale to change its name to Tyndale University College & Seminary. Tyndale was also given the right to confer the Bachelor of Arts degree in the humanities, social sciences and business, as well as undergraduate, graduate and doctoral level degrees in religion, theology, and divinity. On December 5, 2007, Tyndale was given ministerial consent by the Province of Ontario to offer a 12-month Bachelor of Education program to prepare teachers for primary, junior, and intermediate grades.

In June 2006, Tyndale entered into an agreement to acquire a neighbouring facility, St. Joseph's Morrow Park, 3377 Bayview Avenue, from the Sisters of St. Joseph of Toronto. A key reason for Vatican approval of the pending transfer of the campus from Catholic to Protestant hands was Tyndale's commitment to maintain the aesthetically significant chapel as "sacred space". The facility transfer was completed on March 31, 2013, and all departments and offices were moved to 3377 Bayview Avenue in the Spring of 2015. The Catholic girls' high school will continue to operate in a wing of the property until at least June 2018.

Tyndale Seminary is the largest accredited seminary in Canada with more than 700 students at the masters or doctoral level, and the University College received high rankings in the 2009 Maclean's University issue's measure of student satisfaction (see below). In 2011, student satisfaction was amongst the highest of all Canadian universities. While students ranked the quality of teaching and classroom discussion above average, the Maclean's study also found the institution below average in some educational practices, including active and collaborative learning.

The four-year Bachelor of Arts offers an integrative Great Books program in its first year. Majors in business administration, English, history, philosophy, psychology, and religious studies receive a foundation of general knowledge before moving on to their areas of specialization. Tyndale offers a Bachelor of Arts degree in human services conjointly with Seneca College, which allows a student to earn a BA degree from Tyndale plus a diploma in either early childhood education or social service work from Seneca. Graduates of the twelve-month BEd program are eligible for a Certificate of Qualification from the Ontario College of Teachers. The Bachelor of Religious Education (BRE) is a three-year professional degree for students preparing for various forms of Christian ministry. Tyndale also offer a one-year Certificate in Christian Studies.

In 2008 Tyndale received the top score in the Canadian University Survey Consortium survey of students who agreed or strongly agreed that they are satisfied with the quality of teaching they have received; the results were subsequently published in the Maclean's 2009 University issue. Tyndale also ranked first overall in the number of students who strongly agreed that they are satisfied with their "decision to attend this university".

The seminary is the largest theological school in Canada accredited by the Association of Theological Schools in the United States and Canada. It is approved to grant the following graduate degrees: Doctor of Ministry, Master of Theology, Master of Divinity, and Master of Theological Studies. In addition, Tyndale Seminary also offers graduate diploma programs in six areas of concentration: Christian studies, leadership, missions, pastoral and Chinese ministry foundations, spiritual formation, and youth and family ministry. The seminary offers courses in the traditional day and evening format, as well as online and modular courses.

In 2006, an agreement was reached with the Association of Canadian Chinese Theological Education (ACCTE) to establish the Canadian Chinese School of Theology (CCST) at Tyndale Seminary for the training of Mandarin-speaking students and pastors. This led to a long-term agreement, which was signed in 2012.

Tyndale University College and Seminary houses five centres: the Hudson Taylor Centre for Chinese Ministries, the Tyndale Centre for Leadership, and the Tyndale Intercultural Ministries Centre, the Tyndale Family Life Centre, and the Tyndale Spiritual Formation Centre. The Hudson Taylor Centre for Chinese Ministries, named after Hudson Taylor, has a mission to advance Chinese ministries in North America and around the world. The Tyndale Centre for Leadership is mandated to foster the development of Canadian Christian leaders in congregational contexts, Christian organizations, the marketplace and public sectors. The Tyndale Intercultural Ministries Centre's mandate is to link a vast network of local churches, denominations and mission organizations, in partnership with church and para-church organizations by offering training seminars and professional development workshops. The Tyndale Family Life Centre offers professional counselling and supportive workshops for the larger community and members of the general public. The seminary is also home of the Tyndale Spiritual Formation Centre, including the Tyndale Association of Spiritual Directors.

Tyndale University College and Seminary is fully accredited by the Association of Theological Schools in the United States and Canada to award its graduate theological degrees. The University is also accredited with the Ontario Ministry of Training, Colleges and Universities, as well as the Association for Biblical Higher Education. Tyndale is an affiliate of the Council for Christian Colleges and Universities and the Christian Higher Education Canada (CHEC) association.