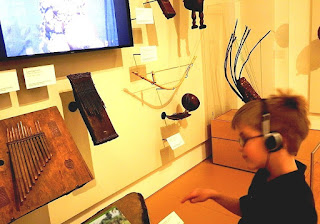 The Musical Instrument Museum (MIM) is located in Phoenix, Arizona. Opened in April 2010, it is the largest museum of its type in the world. The collection of over 15,000 musical instruments and associated objects includes examples from nearly 200 countries and territories, representing every inhabited continent. Some larger countries such as the United States, Mexico, India, China, and Brazil have multiple displays with subsections for different types of ethnic, folk, and tribal music.

Visiting the Musical Instrument Museum in Scottsdale, AZ - I spent a fun (well for me, anyway) couple of hours browsing musical instruments from all over the world at a museum just outside of Phoenix, Arizona.

The Museum was founded by Robert J. Ulrich, former CEO and chairman of Target Corporation. An avid collector of African art and a world museum enthusiast, Ulrich and his friend Marc Felix originated the idea after a visit to the Instrument Museum in Brussels, Belgium. The design of the museum benefited as well from the expert consultation of the MusÃ©e de la Musique in Paris modernised in 1997.

The contemporary building covers approximately 200,000 square-feet, with two floors of light-filled galleries. Built at a cost of over $250 million, MIM creates an exciting musical experience for visitors. The exhibit for each country features a flat screen high-resolution video showing local musicians performing on native instruments. Visitors can listen to the performances through a wireless guidePORT and headphones that are activated automatically when an exhibit is being observed.

The facility contains a 299-seat theater for concerts, which are held primarily after regular hours. Joshua Bell recorded his album "French Impressions" in the theater in 2011. There is also a cafe with both indoor and outdoor seating.

UPPER LEVEL: MIMâ€™s collection is presented in Geographical Galleries that focus on five major world regions. These are:

The Geographic galleries of the museum is a collection of instruments and exhibits that focuses on the five major world regions.

The Artist Gallery of the Musical Instrumental Museum of Phoenix, is where visitors can see the clothes worn by many famous singers. They can also see and hear the original instruments played by Elvis Presley, Roy Orbison, Johnny Cash, John Lennon, Carlos Santana, Tito Puente, Taylor Swift and many other artists from around the world.

Currently, the Board of Directors includes seven people. The Founders Wall was created in 2010, when the Museum was completed, and features the names of actual founders, in addition to those who gave significant gifts.